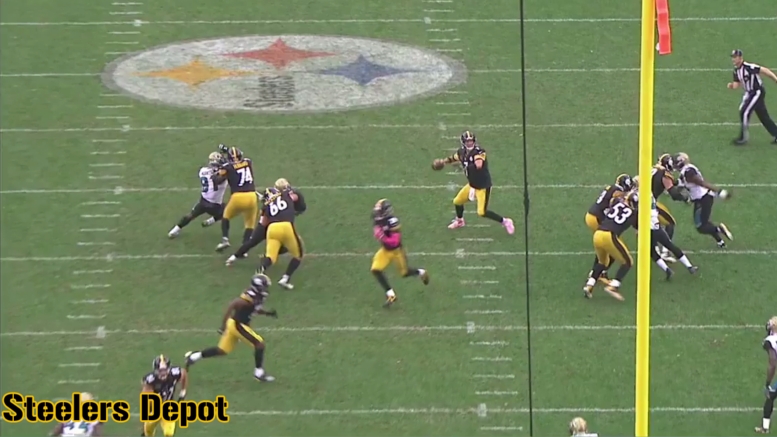 In terms of overall play, I think it would be fair to say that David DeCastro has been the Pittsburgh Steelers’ best offensive lineman, and one of the top guards in the game this year. But he didn’t help his case with his showing on Sunday against the Jaguars.

Not that it was all bad, but there were enough ugly moments to compile the following lowlight reel. And to be clear, this is a sampling specifically of negative plays, not to be construed as an accurate overview of his entire showing.

The ugliness crept up early on, from the second offensive play of the game. He was beaten to his outside by Malik Jackson, who in winning the matchup ran into Chris Hubbard. With DeCastro trying to recover, that allowed the now free Calais Campbell to loop inside and put pressure on Ben Roethlisberger to influence a negative throw.

Early in the second quarter, it was Sheldon Day who was able to win outside on a similar move, though this time he didn’t get home.

These two plays are important to note, because DeCastro lost too many battles this same way. Ultimately he was called for a hold after being beaten against this method, as seen in the cover image, which negated a touchdown pass that would have made it a one-score game.

Late in the half, it was Jackson again, continuing to exploit DeCastro’s mysteriously susceptible outside shoulder, ripping underneath and pressuring Roethlisberger, pawing at the football as he went by, but the quarterback protected the asset and got off a throw that at least picked up four yards.

Early in the second half, the Steelers attempted to run their staple counter run, but both lead blockers failed to pick up their defenders, which resulted in a very rare five-yard loss for Le’Veon Bell.

At the end of the third quarter, the Jaguars put Campbell over DeCastro, showing a power rush that knocked the guard off his base. That allowed the talented rusher to penetrate inside, flushing Roethlisberger out of the pocket, which allowed Dante Fowler to scrape off of Hubbard’s block for the critical sack on third down.

This was probably DeCastro’s worst game in pass protection since perhaps his rookie season, when he played just three games late in the season after coming back from a torn MCL. It was just ugly too often, and that can’t happen again. The Jaguars clearly won the battle of physicality.