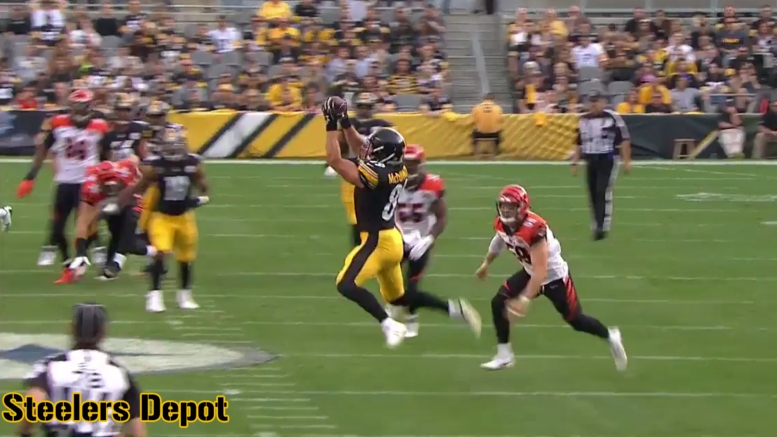 It has taken a good-long while, but it seems as though the Pittsburgh Steelers have finally managed to integrate their newest tight end, Vance McDonald, into the passing game. After getting his first reception last week at long last, on a big 25-yarder from the shadow of their own goal line, he came up with two more receptions on Sunday—though it should have been three.

The Steelers acquired McDonald, known as something of a receiving threat in spite of a reputation for dropping passes, from the 49ers in late August because they were not satisfied with the productivity that they were getting all around from the tight end position.

It has taken about half of the year, but it seems as though they are finally getting to a level of comfort with him in which he is now able to take on a bigger and bigger role. As I mention in another article today, he was comfortably out-snapping Jesse James on Sunday before he had to leave with a knee injury.

But I want to focus today not on his run-blocking—for once, which has been the subject of all of my other articles about him—but rather on his work in the passing game. He was targeted three times, as I insinuated above, but he also played an important role on one non-target.

Early in the second quarter, facing a second and five from their own 41, Ben Roethlisberger was able to find his target on a post for 28 yards, McDonald showing off some speed and athleticism in the process. He did a nice job of getting behind the linebacker here.

It was on the next play as a decoy that was key, however. A big component of hitting on JuJu Smith-Schuster’s wide open 31-yard touchdown pass was McDonald’s ability to effectively run a deep corner route that cleared out that side of the field and coaxed the deep safety into vacating the zone.

Later, toward the end of the quarter, the Steelers had the tight end in the backfield on second and two. He leaked out to make himself available to Roethlisberger, who found him at the 50. He managed to slip past one defender for another six yards.

But he had a chance three plays later to put the nail in the coffin on first and five. Coming off the right side of the line, McDonald was open for a back-shoulder throw that should have been a touchdown.

It would have been a nifty little catch, but I still have this going down as a drop. McDonald is going to become a bigger and bigger part of the passing offense, I have to believe, and the inconsistencies are just something that is going to have to be dealt with. It is an acceptable trade-off if it yields explosive plays, I think.