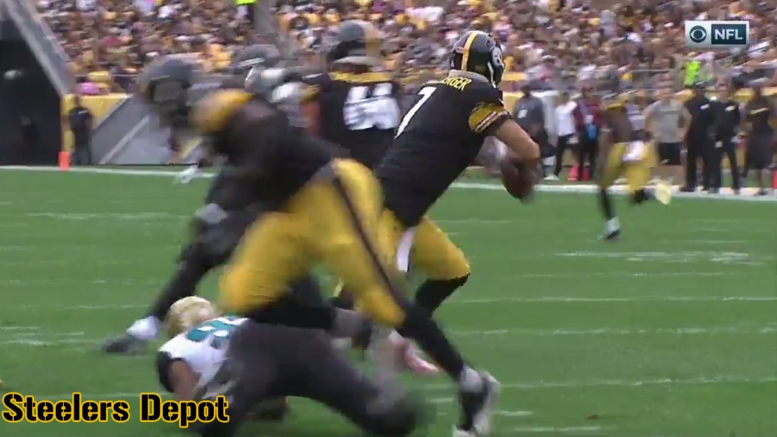 Pittsburgh Steelers quarterback Ben Roethlisberger has been under fire this week—and rightfully so—for the quality of his play on Sunday against the Jaguars. But I think he has also been subject to a lot of unfair accusations, the most pernicious of which being, essentially, that he has already checked out.

That, in my opinion, is not consistent with the tape.

For starters, he has been spotted throwing blocks throughout the season, something that he frankly hasn’t always done. They’re pretty much never pretty, but when a play calls for him to get in somebody’s way, he is willing to do it. Quarterbacks normally don’t look for contact, and not all are willing to block.

On his first interception, he threw the ball knowing that he would be taking a hit if he tried to get the throw off. Granted, it turned out to be an ill-advised decision, since the contact as he threw helped contribute to it being picked off, but he showed, as he always has, toughness in sitting in the pocket to deliver the ball.

And that’s far from uncommon. Late in the first half, with the Steelers backed up in their own end zone, he again stood in the pocket, trying to find Martavis Bryant on a deep pass down the left sideline, which landed about 50 feet down the field. Once again, he took a shot as he threw.

Early in the second half, Roethlisberger knew that he would have a free play because the defense jumped offside. He took a low hit as he threw to assure that he would get the pass off, even though the offense would not suffer with an incomplete pass.

And he still makes plays using pump fakes and buying time stepping up into the pocket. Here he found JuJu Smith-Schuster for 10 yards to set up first and goal.

In terms of diminished talent, he still has the accuracy when he needs it. Just look at this throw to Antonio Brown for 18 yards on a critical third and 12.

Unfortunately, perhaps his best play of the day didn’t even count. That was the 28-yard touchdown pass to Brown on something of a scramble drill, which was nixed because of a holding call. This was vintage Roethlisberger—it just didn’t count.

I don’t fully understand why he hasn’t been as successful this year as he has. The five interceptions in this game were certainly an aberration that included a number of fluky incidents. But I see no evidence of him displaying a lack of effort. And no, I’m not counting him staying down after throwing an interception, as though he’s supposed to do something about a guy running up the far sideline.