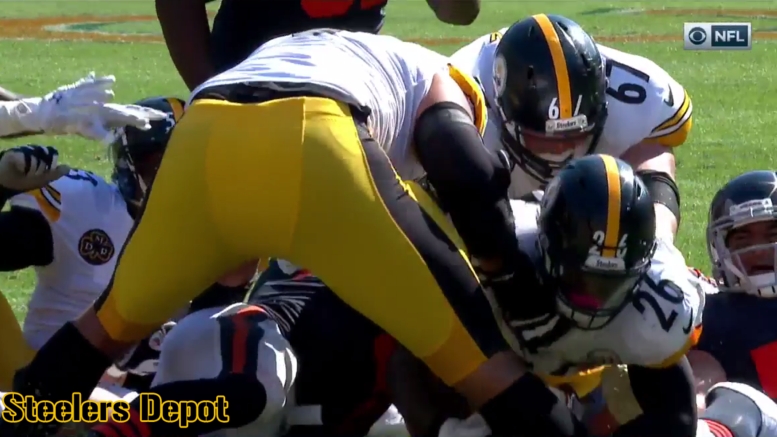 B.J. Finney is not new to the NFL, or to playing on Sundays, having made three starts last season, but he is new to the role of playing as a tackle-eligible at the end of the line. Sunday was his debut in that role with Chris Hubbard forced into action at right tackle due to Marcus Gilbert’s injury.

All things considered, given that he did not get a lot of practice time in preparation for this role, Finney seemed to do well in my book. They did not ask him to do much—I don’t believe they put him on the move even a single time—but he did what he was supposed to do.

In fact, he was key on the Steelers’ longest rushing play of the season to date, James Conner’s 23-yard run in the first quarter against the Ravens. Working with Vance McDonald on the left side of the offensive line, the two were able to seal the edge. With David DeCastro and Roosevelt Nix leading the way, Conner had no trouble finding room to run.

In fact, he worked pretty well with the tight ends all day, which is something, as an interior lineman, that he would not be used to. On a six-yard run from Le’Veon Bell early in the second half, Jesse James chipped the edge defender to help Finney connect on the reach block and seal the edge.

He got the bulk of his work, however, late in the game on the Steelers’ closing touchdown drive, which featured runs on all but one play, and even that only ended up as a pass because they got a free play with a defender jumping offside.

In what was practically a mirror image of the Conner run above, Finney and McDonald once again sealed the left end as DeCastro and Nix led the running back—Bell this time—through the gap for a 21-yard gain, their two explosive runs of the season coming off their staple run.

Shortly thereafter, we have another look at a mirror image of the second play above, with the tight end providing a chip to help Finney lock on to a reach block that in this case helped convert on third and four with a six-yard run.

It was just two plays after that that the Steelers put the exclamation mark on their performance with the second rushing touchdown from Bell of the game, featuring DeCastro and Nix sweeping out to the right. Finney and James were responsible for containing the playside pursuit here.

As I pondered earlier this morning, I do wonder if, when Gilbert returns, the Steelers will still entertain using Finney in this role. It has previously gone to the more mobile Hubbard, but they may even want to use both in certain instances. At the least, it’s an option that they now have.