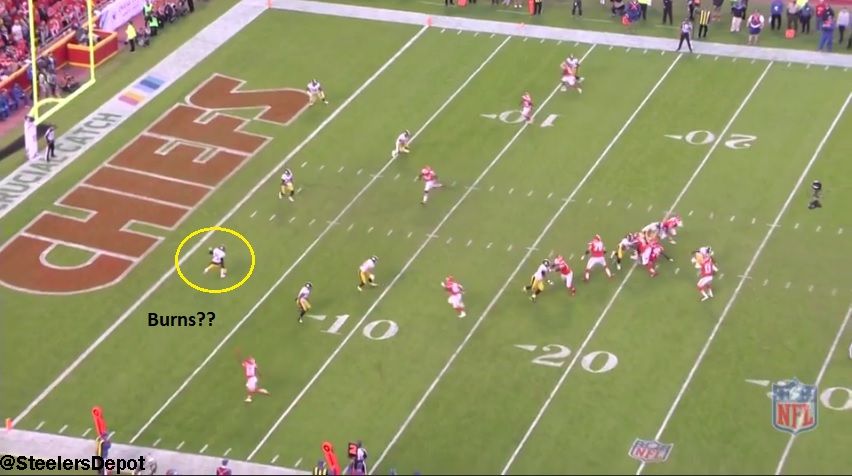 We’ve written how the Pittsburgh Steelers’ secondary got a little lucky throughout the season and Sunday, they finally got burned on the stat sheet. Artie Burns in particular, as has really been his whole career so far, was up and down. He had some legitimately excellent plays and is showing better technique to play the ball. But there was also some bad. One that resulted in a touchdown, another that should’ve. Let’s look.

The first is De’Anthony Thomas‘ 57 yard TD in the fourth quarter. Big play the Steelers can’t give up. This is all on Burns for falling asleep at the wheel. Thomas, the #2 receiver, runs a literal wheel route. Should be a clear alert. Something the Chiefs do a lot, like we wrote in our scouting report, and when #1 stems inside, you have to be alert for him being replaced by #2.

Burns is in zone, identifying #1 coming inside and pointing him out to make sure he gets picked up. But Burns totally fails to match #2 vertical and Thomas gets behind him. Misses the tackle and Thomas scoots away for the touchdown.

Got worse later in the game. Steelers running their Sam Fire Zone with the nickel corner, Mike Hilton, blitzing off the edge. By far, their most popular fire zone. Here’s a look at it drawn up.

When things go wrong, it’s hard to know exactly what the issue is. But everytime the Steelers run this, the corners have deep third responsibility. Instead, Burns just…leaves and drifts to the middle of the field. The #1 receiver has a free path to the end zone.

The only saving grace is the pressure Hilton got off the edge, forcing a bad throw by Alex Smith. It’s incomplete and the Steelers get away with it.

I will say that things did look a little wonky across the board. The buzzing safety to the flat and dropping OLB get too bunched up and I don’t like how the Steelers replaced Hilton on the other side. Doesn’t look like Ryan Shazier is getting enough width. So there’s a lot of weirdness that maybe creates confusion.

But here is how it’s supposed to look. Against Jacksonville, Burns matching #1 with the safety buzzing.

Unfortunately, for as immensely talented as Burns is, we’ve seen him break down too often when asked to think. When it’s all instinct, the guy can play. When he has to think: crack/replace issues, matching the new ##1 (Thomas’ TD), or juggling the responsibilities in his fire zone, we’ve seen him break down too often. It has to get corrected in order for him to become the #1 corner he has the potential to be.