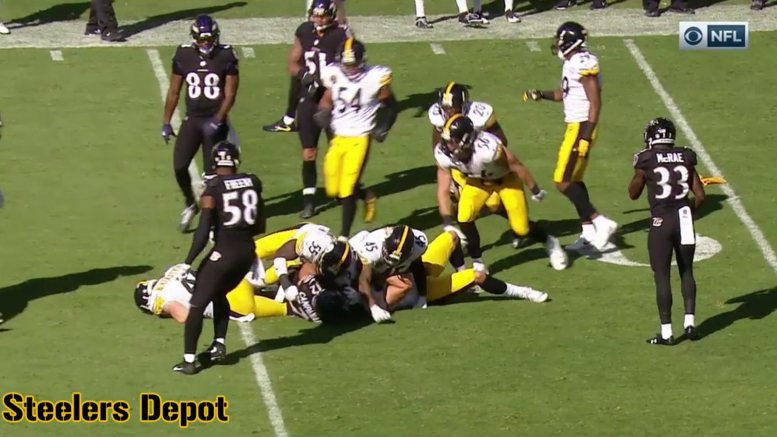 Every week starting with this season, I like to try to put a spotlight on one aspect or player on special teams from the previous game in order to bring to light a pretty big component of the sport that often gets overlooked, since special teams are usually taken for granted unless a big play happens.

This week, I actually want to highlight the importance of having a role on special teams to having a roster spot. We already saw how Eli Rogers losing his punt return role coincided, at least temporarily, with losing his helmet. And I believe James Harrison’s lack of special teams play—and not an illness—is what is actually keeping him on the sidelines.

With Anthony Chickillo for now serving as the third outside linebacker, and helmets needed elsewhere on the roster, Arthur Moats has been given the final linebacker hat on game day, or at least for last Sunday, which is the only time so far that they have had to choose.

But they will have to again on Sunday, and Harrison is no longer ill. So either he dresses and it was really just because he missed practice time with his illness, or he doesn’t because Moats plays on special teams and he doesn’t.

So what exactly does Moats do on special teams that is so important? He serves as the left ‘tackle’ on the punt coverage unit, which means that he got a handful of snaps on Sunday on the instances in which the Pittsburgh Steelers punted the ball.

Take an early punt in the second quarter, for example. His primary responsibility as a player on the line is to protect the punter, and he does this with ease. He was slow to get down the field after the punt because he tripped over his wing, Roosevelt Nix, but as you can see he worked down the left flank to man the outside gap.

Late in the third quarter, the Ravens overloaded the opposite side of the punting formation from Moats, so the whole protection had to slide down after the snap, and they played it well. He was also the first from the line to be able to break down into coverage, though it was a poor punt that traveled just 32 yards to the 23 before bouncing out of bounds.

Early in the fourth, he did a nice job of sealing off Kamalei Correa, who then returned the favor as a blocker once the ball was kicked, but he still got down the field after the returner muffed it initially and tackled him along with Nix and others. The Ravens drew a flag on this play though, so they were backed up 10 yards from the muffed spot.

Just a few minutes later, the Steelers were punting again. He didn’t have to do much as a blocker here, so he was able to get down the field quickly and join multiple other Steelers, forcing the returner to waive off the ball and hope it either bounced forward or into the end zone.

It might not seem like all that important of a role, but we saw the week before what could happen when you have a backup in there, when Xavier Grimble—in for Stephon Tuitt—allowed a field goal to be blocked.