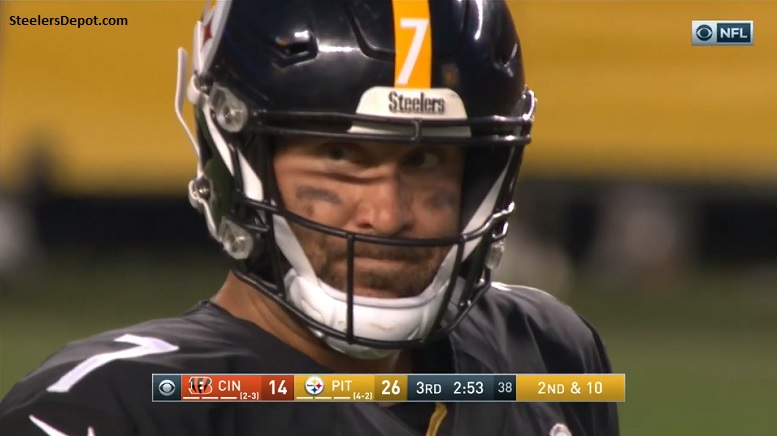 The Pittsburgh Steelers will play the Detroit Lions on the road Sunday night and it will be interesting to see if quarterback Ben Roethlisberger is able to get his deep passing game on track in that contest.

Entering Sunday’s game, Roethlisberger has completed just 21 of 60 deep pass attempts on the season for 594 yards with two touchdowns and five interceptions. However, it’s worth noting that three incompleted throws that don’t show up in his totals drew pass long-yardage pass interference calls.

In the Steelers first seven games of the 2016 regular season, Roethlisberger completed 25 of his 50 total deep pass attempts for 727 yards with seven touchdowns and three interceptions so you can definitely see he’s had a drop-off this year.

Sunday against the Lions, Roethlisberger will be looking to get his deep passing game on track against a Lions defense that has only allowed 15 such completions on 39 total attempts in their first six games of the 2017 regular season. Of those 15 deep pass completions against the Lions defense this season, only six were caught by four different wide receivers on opposing teams. Of those four wide receivers, Stefon Diggs, Kelvin Benjamin, Adam Thielen and Brandon Coleman only one of them, Diggs, caught more than one deep pass (4).

While Roethlisberger won’t have the services of deep-threat wide receiver Martavis Bryant Sunday night against the Lions due to him being benched this week for conduct detrimental to the team stemming from his Sunday night social media outburst, the Steelers quarterback will have the team’s top wide receiver Antonio Brown on the field with him.

Brown, as you can probably imagine, currently leads the Steelers in deep pass receptions with 12. As for the other Steelers wide receivers who will suit up Sunday night against the Lions, JuJu Smith-Schuster, Eli Rogers, Darrius Heyward-Bey and Justin Hunter, those four players have combined to catch just four deep passes from Roethlisberger in the team’s first seven regular season games with the latter two players currently shutout in that statistical category.

Lions top cornerback Darius Slay will probably follow Brown around the field quite a bit Sunday. At least that’s what the wide receiver expects to happen.

“We had him up here in training camp last year,” Brown said of Slay on Friday. “Great corner, top corner, great competitor. He usually takes the opposing team’s top receiver, so I look forward to seeing a lot of him come this weekend.”

As for Hunter, who will dress in place of Bryant Sunday night, he’ll probably be targeted deep a few times by Roethlisberger Sunday night in Detroit. With that said, the former 2013 second round draft pick of the Tennessee Titans enters Sunday’s game with only 21 deep pass receptions so far during his career. He’s also only caught two passes for 11 yards in the two other games he’s played in so far for the Steelers.