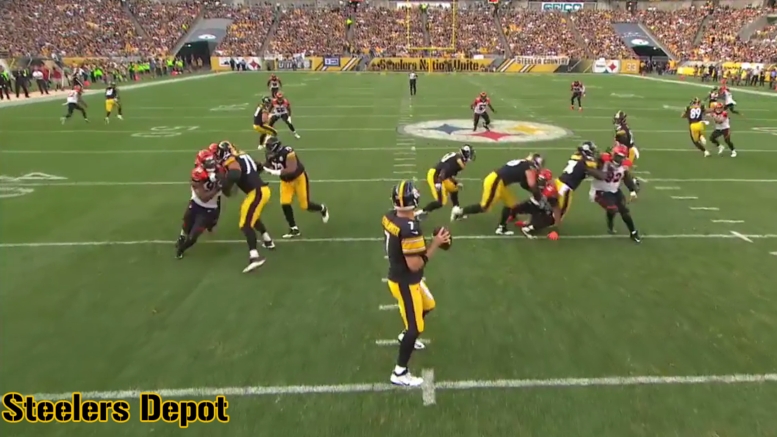 I don’t think it would be accurate to say that the Pittsburgh Steelers offensive line picked up right where it left off from a season ago. But they have gotten pretty close to that level by midseason, and should, hopefully, continue in an upward trajectory today as they head into the bye week.

The fact that they have gone most of the way without starting right tackle Marcus Gilbert to date is a fact that absolutely should not be ignored. Chris Hubbard deserves a lot of credit for the workmanlike effort he has turned in through four-plus games’ worth of work already, an effort that continues today in yet another start.

One person in particular who is more than happy to tout their play to date would be quarterback Ben Roethlisberger—but then again, he loved his 2008 offensive line as well, so really, maybe what he says about the play of any of his offensive linemen should be taken with some bias in mind.

Still, after years of being banged up by this time of the year, even with superior protection, he is counting his blessings. “I feel great”, he told reporters, according to Joe Rutter. “I feel healthy. I think that’s a credit to the o-line. They’re really doing a great job of protecting me”.

To date, only three teams have allowed fewer than the Steelers’ 10 sacks on the season, and as I mentioned earlier, after their zero-sack performance last Sunday, they are actually at a slightly better pace this year than last year, having given up 11 sacks by this point a year ago.

“I know last game was our first no-sack game”, Roethlisberger said, “but every game it’s just been one here and there. That’s it”. And the truth is that at least one sack was on Jesse James, while two sacks ‘given up’ by Alejandro Villanueva had a Le’Veon Bell chip attempt as a contributing factor.

“So I’m really happy and proud of the way they have played”, Roethlisberger continued gushing about his linemen. “They are the reason I stay healthy and upright, so I can never say enough good about them”.

One of the main reasons that Todd Haley was brought in to replace Bruce Arians as offensive coordinator several years ago was to help keep Roethlisberger healthy by reducing the number of hits that he takes. He has been successful in lowering the number of hits, but a few freak instances have still wiped out stretches of several seasons for the aging quarterback.