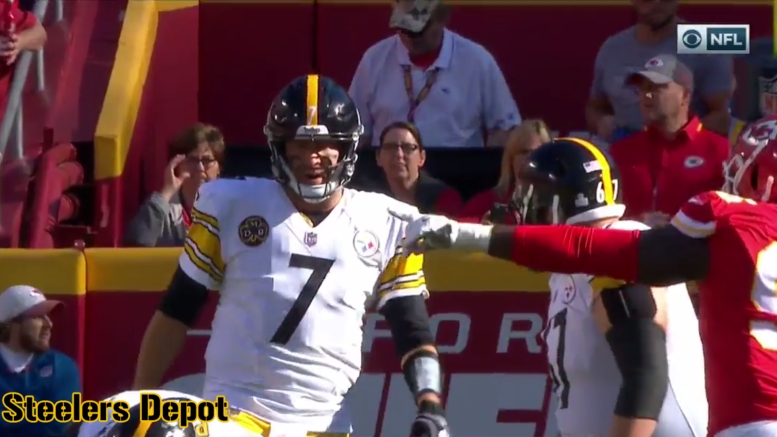 So, after throwing five interceptions at home against the Jaguars last week, how did quarterback Ben Roethlisberger do for the Pittsburgh Steelers yesterday, on the road against the only remaining unbeaten team?

That’s hard to say immediately off the bat, but it’s obvious enough to say that he didn’t play as poorly as he did the last time around. Upon initial inspection, for example, he only threw one pass that should have ended up as an interception—and, in a twist, that was not the interception that he threw, but rather his touchdown.

Statistically, his numbers were sound, and efficient. In fact, he officially attempted just 25 passes on the day, and completed 17 of them for 252 yards. That is a completion percentage of 68, and he averaged better than 10 yards per pass attempt, which is a significant upgrade from what he has been doing on the season to date.

Entering yesterday’s game, Roethlisberger was at or near career-lows in both figures, with a completion percentage of 61.5, under that number in just 2006—after a motorcycle accident—and 2008—behind arguably one of the worst offensive lines of all time, and consistently injured.

He saw an upswing in both numbers, now completing 62.3 percent of his passes and averaging 6.9 yards per attempt, but it will take more work to balance out those numbers to a level better representing where he should be for the season.

Let’s try to dig a little deeper here, though. As I mentioned, his interception shouldn’t have been an interception, and his touchdown should have. On the former, Antonio Brown stopped his route short, where it sailed passed him and was picked off by a diving Marcus Peters on third down.

Brown took the blame for that one after the game, but he deserves all the credit in the world for turning a pass that Roethlisberger hung out to dry—he said Brown got deeper than he wanted—and bounced off of a defender’s facemask into a 57-yard touchdown that ended up providing the margin of victory late in the fourth quarter.

Earlier in the game, he just missed Vance McDonald on a deep throw near midfield, but later connected with the tight end on a 26-yarder from the one-yard line on a great throw. He hit Martavis Bryant in stride for a catch-and-run of 20 yards. He connected with JuJu Smith-Schuster for 15 yards on third and seven.

Beyond the actual results of the plays, Roethlisberger’s passes were more accurate yesterday, and his decision-making with the ball in his hands was better. It was clearly a bounce-back game, but one in which he did not have to do much, or at least not do it often.