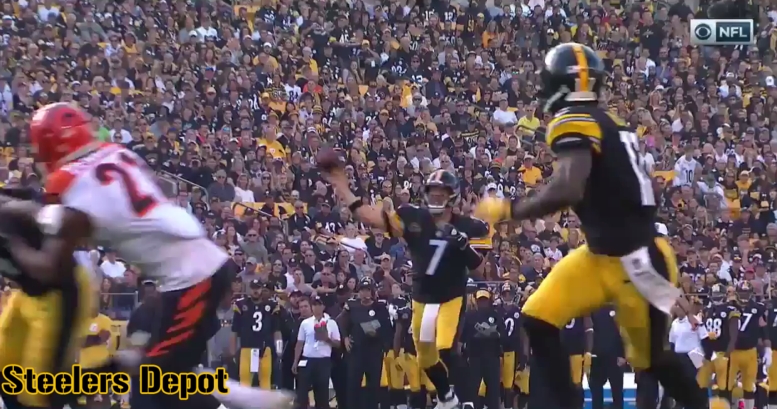 There were many who were prepping the obituary for Pittsburgh Steelers quarterback Ben Roethlisberger just two weeks ago after he threw a career-worst five interceptions against the Jaguars, two of which ended up being returned for touchdowns.

An extensive number of people were not simply saying that he no longer had the skill to play anymore; they were accusing him of no longer having it in him to play the game, saying that he was already mentally retired. No doubt there are many who will continue to believe that no matter what happens from this point on.

But he has clearly looked much better and more composed over the course of the past two weeks than he had prior. And that has also come with an offensive game plan that takes some of the focus and responsibility off of him and more onto the ground game. He has only attempted 49 passes the past two weeks, while they have run the ball about 70 times.

Yesterday, he did only complete 14 of his 24 pass attempts, which many of those incompletions coming late, but he did throw for 224 yards, averaging a quite healthy and respectable 9.3 yards per throw. He is now averaging over seven yards per pass attempt on the season, when it had been closer to just six yards just two game ago.

Most importantly, he has thrown three touchdowns over the course of the past two games, including two yesterday in the first half, two one interception, and that was on a ball that should have been completed, had it not been for Antonio Brown errantly stopping his route.

He has gotten his quarterback rating back up north of 80, at least, having now thrown nine touchdowns on the season to eight interceptions, completing approximately 62 percent of his passes and averaging, as mentioned early, 7.2 yards per attempt.

There is certainly work to do in order to get him to play more consistently on a play-to-play basis, but as he showed once again yesterday, he still has the capability of making some elite passes that few others in the game would be able to.

I still don’t really know what the Roethlisberger of 2017 has to offer, at the end of the day. He hasn’t really been at his best for a full game yet this year, but will he ever be? Perhaps a showdown with a quarterback like Matthew Stafford next week is something that he can step up for.