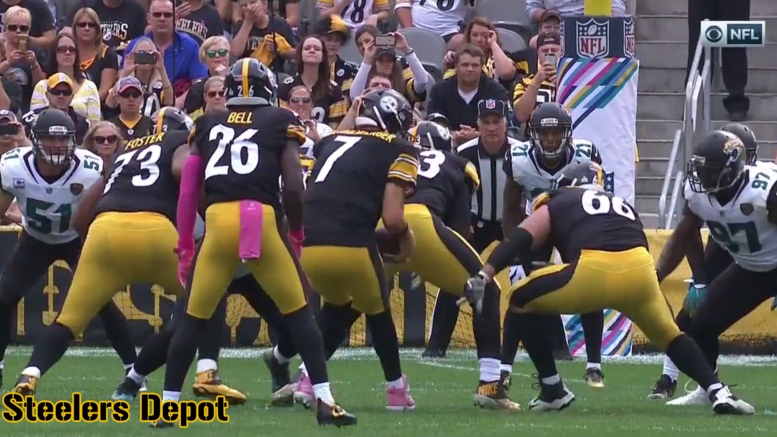 There is something of an impression that the Pittsburgh Steelers are not running the ball enough. And that might be true. But never the less, because of that, it might surprise you to know that they have run the ball on first down 63 times this season, an average of roughly 12 times a game.

The more important piece of that conversion, however, is inevitably how they performed on first down while running the football. Luckily, I just so happen to have those numbers, so I figured that it would be worthwhile to enter that information into the conversation.

Four of those first-down runs were actually wiped out by penalties, including three holds—on three different players—and one illegal shift. It’s too bad, too, because they averaged 7.75 yards on those four carries. Of course, it helps when you hold.

But let’s focus on the first-down runs that actually counted. There were 59 of those, with all but three of them being at least first and 10. The other three were first and eight and two from the one-yard line on first and goal. Taking all of them together, in terms of yards gained on the carry, the Steelers are only averaging 2.83 yards per carry on first down.

It drops even further if you include a minus-four-yard run on which another 15-yard loss was tacked on due to a post-whistle foul, drooping down to 2.58 yards. And it’s slightly better if you remove the two carries from the one-yard line, up to 2.89 yards per carry. All of them are bad, by the way.

Of the 57 runs from first and eight or longer, the Steelers have astonishingly recorded just twelve successful carries, which would equate to them gaining 45 percent of the needed yardage for a first down or better. So that means that they gained at least five yards on first down just 12 times. Of course, you can throw back to two one-yard plays from the one—touchdowns, that is—for a total of 14 successful first-down runs on 59 carries.

So let’s go with that. what does it work out to? Just a 23.7-percent success rate. That is terrible. The running game is consistently putting the offense in bad down-and-distance situations at a rate of more than three out every four plays on first down. Simply astonishingly bad.

12 of those 57 carries—let’s remove the touchdowns for now—either gained no yardage or lost yardage, including losses of four and five yards. Another 10 runs gained just one yard—again, excluding the touchdowns—nine went for two yards, and 14 went for three or four yards.

Only nine of their first-down runs gained between five and nine yards, and they have had just three runs gain 10 or more yards, with one of them coming on first and 20.

Think about this: on the 59 times that the Steelers ran the ball on first down, they were faced with a second and seven or worse 37 times, or second and six or worse 46 times. If knowing that running on first and down would yield no better than second and six 78 percent of the time, then it really should not be much of a surprise if they might not be inclined to run the ball so frequently.