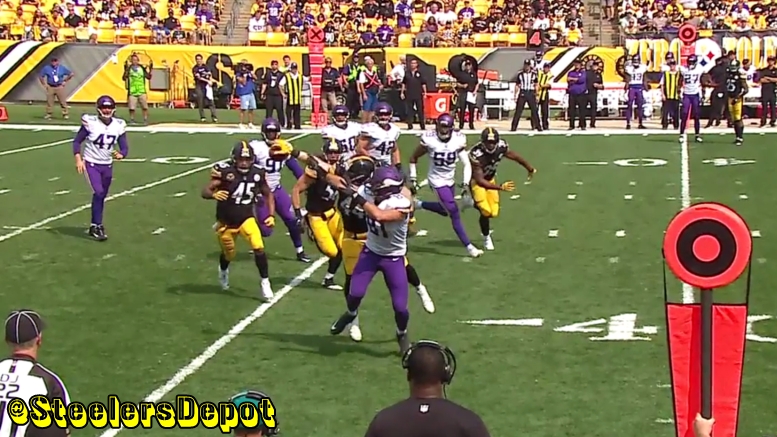 So apparently this special teams stick is a real thing, and apparently Tyler Matakevich is determined to wield the damn thing every week. Which I’m perfectly fine with, because the young man is out there making an impact in the third phase of the game—more than can be said for his work in the goal-line defense so far.

As Alex Kozora wrote about on Saturday, special teams coordinator Danny Smith uses a black-and-gold walking stick as incentive to get the most out of his players, but this year, it appears to mean more than anything. The basic gist is that whoever is their best performer of the week wields the ‘scepter’ for the week.

But this year, the Steelers and Smith are no longer going forward with a special-teams captain, a role in which Robert Golden has served for the past few years. Now, it is he who wields the scepter who comes out with the team’s other captains—Ben Roethlisberger and Cameron Heyward—for the coin toss.

Yesterday, the co-wielders of the special scepter were Matakevich, who was responsible for the difference-making blocked punt early in the season opener, and Anthony Chickillo, who recovered the ensuing loose ball in the end zone for a touchdown.

But I think Matakevich is going to be walking around the UPMC Rooney Sports Complex solo this week, wielding that black-and-gold stick like a boss, because he definitely made the special-teams play of the day, all on his own.

Early in the third quarter, after Cameron Heyward’s pressure forced an errant pass on third and four from the Vikings’ 41-yard line, they got the crazy idea of having the punter throw a pass. The unit played head-up, however, with Mike Hilton smartly charging the punter as he threw.

Looking for the tight end Blake Bell, whom the Vikings recently claimed off waivers, Matakevich did a nice job of drifting back into coverage and perfectly broke up the pass in front of the receiving target, producing a turnover on downs.

Unfortunately the offense didn’t really capitalize on the good starting field position, though they did get a field goal out of it, but it was an important stop nevertheless in what was at the time a 14-3 game. A momentum-changer like that, if igniting an eventual touchdown drive, could have potentially cut the lead to 14-10, or even 14-11.

It is plays like these that help to remind people that special teams matters, and that you need to make the investments of talent and practice in the special-teams units in order to get high performance out of them, yet it is the little things that don’t get nearly as much attention that prevent those things from becoming big ones.

And so there’s the stick. For the first two weeks of the season, the stick-wielder will be a guy who made a big play, but that won’t be every week. I think it will be cool to see somebody who didn’t make a huge, attention-grabbing play honored with a pre-game captain’s nod for his solid, consistent play.