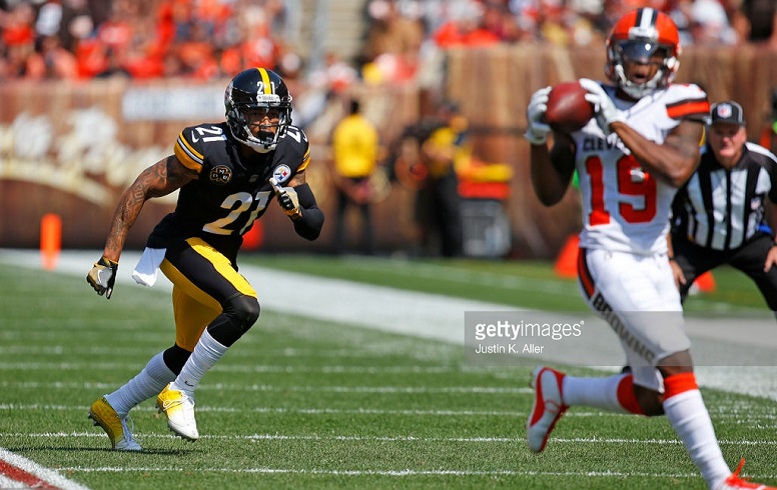 The Pittsburgh Steelers debuted their newly rebuilt secondary in their 2017 Sunday regular season opener against the Cleveland Browns and it featured new cornerback Joe Haden playing opposite second-year cornerback Artie Burns. Both players played quite a bit of man-coverage against the Browns and during his Tuesday press conference, Steelers head coach Mike Tomlin was asked to assess the performance of both Haden and Burns in those situations.

“In regards to man coverage, I thought both guys were above the line,” Tomlin said of his two starting cornerbacks. “We’ll just continue to work with those guy. Much like you talk about a rush plan being multiple, a coverage plan has to be multiple. I know a lot has been written and said about our desire to increase our man-coverage, but it’s not like we’re just solely going to jump into man-coverage bed. We just want to have a full suite of weapons to throw at you in terms of the things that we’re capable of doing and man is just part of it.”

While Sunday was Haden’s first game with the Steelers, Pro Football Focus wasn’t quite impressed with his play against his former team as they issued him a grade of 51.4 out of a possible 100. Here is what they wrote about Haden on Monday:

Haden’s first game in a new uniform coincidentally came against his former team. While he broke up a pass early on, the rest of his outing was average at best. He didn’t give up any major plays, but did allow six catches for 80 yards and a 106.3 passer rating into his coverage.

Haden finished the game with six total tackles and that included a sack. He also was credited with one defensed pass on Sunday.

So, what did Tomlin think about Haden’s play against the Browns?

“Joe did a nice job, he fit in quickly, he learned what to do,” Tomlin said. “We had a good day, collectively. It’s tough to point to the addition of one man that’s here a week in terms of producing seven sacks and things of that nature. He did produce one sack, because we brought him and he got the sack.”

The Steelers defense did indeed produce seven sacks Sunday against the Browns and since then the talk has been mostly centered around whether those quarterback take-downs were a result of a good pass rush, solid coverage, or both.

“As always, our pressure, or our coverage, they work hand in hand In some instances,” Tomlin said Tuesday on the topic. “We sacked them because we were applying pressure, meaning bringing more than four, and in some instances, we sacked them even bringing three and those can be attributed to coverage. But that’s no different than we normally function. It has to be a mix. I think too much of any makes you predictable and when you’re predictable, you can be attacked. We look to find a mix and bring four and three and five-plus and I thought the game reflected that.

Tomlin was also glad to see his defense not give up too many explosive plays to the Browns offense.

“I thought we did an awesome job of minimizing big plays,” Tomlin said. “If you keep the ball in front of you, you’ve got a chance. We largely did that.”

In case you’re keeping score, the Browns offense registered four plays of 20 yards or more on Sunday. Two of those happened on deep passes of more than 15 yards past the original line of scrimmage. One of those, a 23-yard completion from Browns rookie quarterback Deshone Kizer to wide receiver Corey Coleman, came with Haden in coverage on the right side of the field.

The Steelers will now begin to prepare to play the Minnesota Vikings Sunday at Heinz Field and judging by what happened in their Monday night win over the New Orleans Saints, Haden, Burns and the rest of the Pittsburgh defense will likely be tested quite a bit via the pass. Vikings quarterback Sam Bradford completed 27 of his 32 total pass attempts for 346 yards and three touchdowns against the Saints in a 29-19 home win.