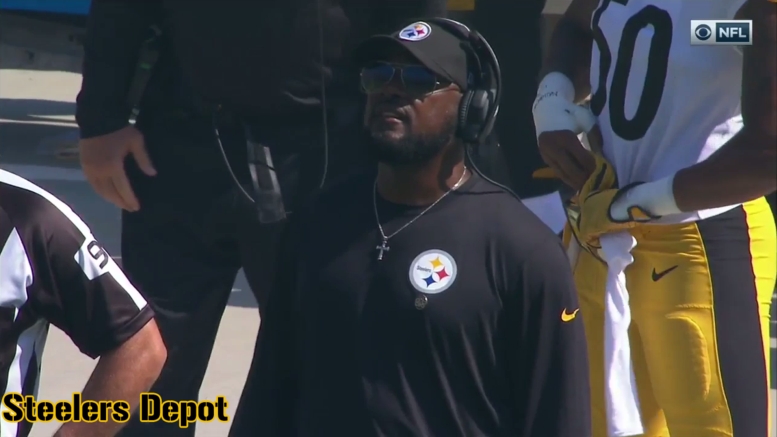 It has become exceedingly obvious over the course of the past few days that, try as we all might, it is ultimately impossible to deny the reality that football exists within reality, and not in a vacuum, played by active citizens. We have seen sports and politics intersect in a big way as a result.

Much to the chagrin of Pittsburgh Steelers Head Coach Mike Tomlin, who viscerally expressed his displeasure over the position that he was thrust in. During his post-game comments yesterday after a frustrating loss, when asked if the pre-game anthem impacted his team’s performance, he responded in part by saying, “because of our position, we get dragged into bullshit, to be honest with you”.

Tomlin said that he learned late in the week of “rumblings of guys talking” on the team with respect to certain obvious comments that don’t need to be rehashed here, and how certain players on the team may have wished to respond.

As a football coach and leader of men, the furthest thing from his interests was allowing elements of division to creep into the locker room, so he mandated that the players agree upon a decision amongst themselves to determine what course of action they would take.

According to Jacob Klinger, the players voted on what action to take, among three, with, reportedly, the option of all players out on the field doing whatever they wanted (some kneeling, etc.) being immediately shot down and not even reaching a voting stage.

But more importantly, the head coach just wanted to be a head coach and didn’t want his job to be complicated by things that are not football.

“The big thing is that we remain united”, he said of his locker room, and he stressed that it was not his decision, but rather the players, who voted to remain off the field in unity. He merely mandated that they collectively reach a mutual decision.

According to Klinger, it was understood that Alejandro Villanueva would be an accepted exception regardless of what decision was made. “Al was cool with it, with whatever we went through”, Chris Hubbard said. “He was on board”.