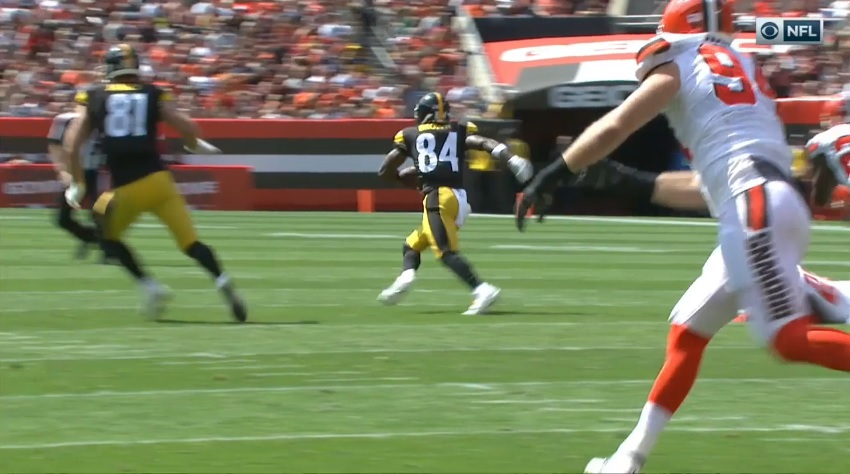 Todd Haley has coached in the league for a longtime. And Antonio Brown has caught many, many passes throughout his career. But Brown’s spectacular play is still able to surprise and wow Haley, who said three catches Brown made against the Cleveland Browns were the best he’s ever seen.

“Those are three of the best catches I’ve seen,” Haley told reporters. “And I’ve coached receivers for a longtime.”

Those three he’s referring to. The slant Brown managed to haul in despite getting nearly dragged down, the jump-ball at the end of the game, and the tip drill reception than went for 50 yards.

Antonio Brown. The best receiver in the NFL. pic.twitter.com/h6lG7zTtW1

AB IS NOT HUMAN pic.twitter.com/Pj9QElPpfb

Brown has become famous for being the first player on the JUGS machine following a Latrobe practice, spending a good 15-20 minutes catching passes as other receivers sit and wait their turn. Day in, day out, no time for rest.

As Haley was speaking with reporters, Brown was on the side, catching passes.

He explained that third one I’ve shown above, the tip, was the most impressive catch.

“That one deflected ball was probably the most impressive to me. It wasn’t an early tip that happened at the line. It happened three or four yards in front of him, if not less. The quickness of his hands to that ball to catch it clean with his hands, you just don’t see that. Those are balls you see bounce off people’s facemasks.”

No matter where you go, no matter who you talk to, Brown always is miles ahead as the game’s hardest worker.

“He outworks everybody in the world. It’s really fun to see it pay off for him.”