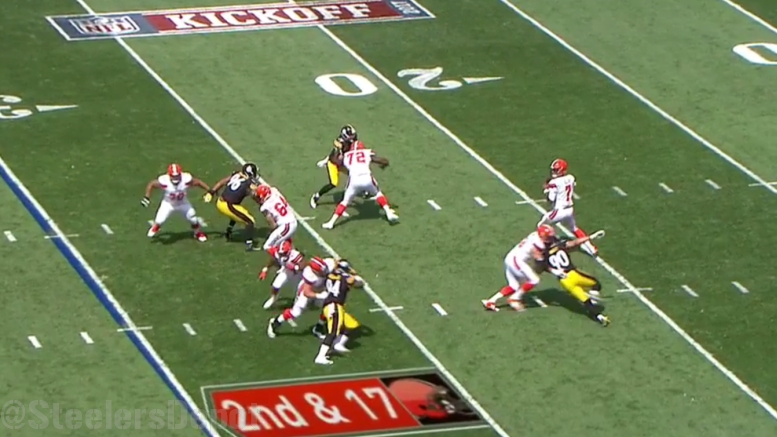 We are only one week into his NFL career, but it already seems as though Pittsburgh Steelers rookie outside linebacker T.J. Watt has a bit of Captain Ahab in him. Rather than taking pride in the fact that he recorded a pair of sacks in his debut performance, he is more interested in fixating on one that he feels he missed earlier in the game.

When he asked reporters what he would remember most from his historic debut, he said, “I’ll probably remember missing that first sack that I should have had over any of those plays”, ‘those other plays’ being the aforementioned pair of sacks, in addition to an impressively athletic interception. He also recorded five tackles on defense and another on special teams.

He did concede, almost begrudgingly, that he was glad to have gotten the interception, saying, “any time you can get a pick and change the possession for the team it’s huge, so I’m pretty happy with that play”.

But it is demeanor of never being satisfied with his performance that I think should serve him well and fuel him throughout his career. And it seems especially appropriate for a player at this position, who is, in a way, a hunter perpetually on the chase of his prey, that being the quarterback.

The vast majority of the time, the ‘deer’ skitters away, and sometimes you’re left holding your rifle before even being able to fire a shot. But there are none so memorable as the shots that you misfire on and let the deer slip away.

There is a certain mentality that comes with playing the pass-rushing position in the NFL, and is something that Bud Dupree too has talked about in the past, saying something to the effect that missing a sack can be so frustrating that he can even get to you mentally.

For the great pass rushers, they used that frustration as the drive necessary to get back into the backfield and finish the job. The Steelers are hopeful that both of their primary hunters are on the prowl tomorrow against the Vikings, and this time their prey is not the mobile rookie, but an older marginal starter with nondescript athleticism and a bum knee.

After doing a solid job in going up against Joe Thomas last week, it will be interesting to see how he fares going up against Riley Reiff for Minnesota. According to Pro Football Focus, he kept a clean sheet on 33 snaps in pass protection this past week.

Last season with Detroit, however, Reiff finished 36th among tackles who played at least half of their team’s offensive snaps in pass blocking efficiency, giving up four sacks, two hits, and 38 pressures over the course of the season. That is nearly three pressures per game.