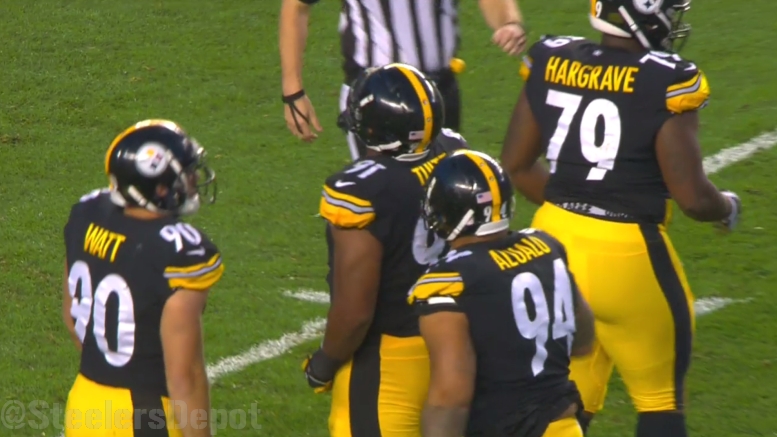 He may be pretty new to the team, but veteran defensive lineman Tyson Alualu is certainly not new to the game of football, and in his first year with the Pittsburgh Steelers after spending the previous seven with the Jacksonville Jaguars, he has already had his impact in helping the team grow.

As we talked about yesterday, Sunday’s injury scare for Stephon Tuitt was somewhat of a cold reminder of how significant the addition of Alualu was this offseason, in order to avoid a repeat of what happened last season when the Steelers were missing key pieces of their defensive line.

Tuitt left the season opener after just two snaps when he injured his arm, and Alualu had to play the rest of the way. The fourth-year defensive end even noted during his WDVE radio spot yesterday that he played more than Cameron Heyward in the opener, registering five tackles to boot.

And he also talked about his impact in the room, in bringing in another player with a high pedigree along himself and Heyward, as well as second-year Javon Hargrave at defensive tackle, who already got himself his first sack of the season on Sunday.

“He’s a veteran player. He’s a first-round draft pick out of Cal”, Tuitt said of Alualu. He called him “very aggressive”, describing him as a “great player” who possesses “great quickness about him too. To have a guy like that”, he pontificated as his voice trailed off.

But he also talked about how Alualu has helped his own game on a direct level. As I mentioned at the top of this article, he is no neophyte, and has been around the league for seven years. While he was only with one team, he has seen coordinators—even head coaches, owners—come and go, and has played in different schemes.

“He also taught me stuff when he came in”, Tuitt said. “Of course Jacksonville ran a little different type of defense than we’ve run, but he was absolutely very informative with some of the things and techniques that he learned, especially from a pass-rushing standpoint”.

Over the course of the past two seasons, the former second-round draft pick has recorded 10 and a half sacks over 28 games to go along with two forced fumbles, four passes defensed, an interception, and 91 tackles.

On his two plays on Sunday, he applied pressure to the quarterback on first down for a hurry, and then made a tackle for a nine-yard loss. Not bad for about a minute’s worth of work. But Alualu held his own in Tuitt’s absence.

The man who just signed a five-year contract extension is hoping to get back out on the field as soon as possible in an attempt to have his best season yet. He knows he left plays on the field a year ago and has worked hard to better himself in the offseason. Learning from his new teammate was but a small part of his growth.