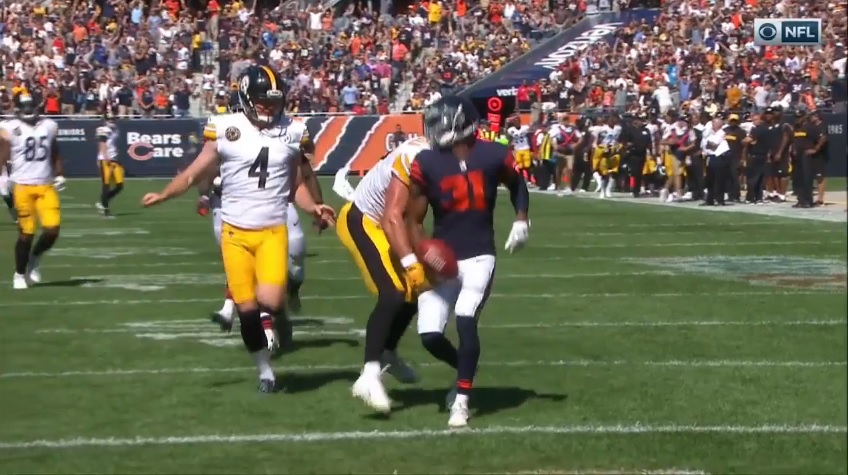 Well, that was a disaster.

As they have multiple times in the Mike Tomlin era, the Pittsburgh Steelers dropped a game on the road that they absolutely shouldn’t have, falling to the Chicago Bears in Soldier Field Sunday, 23-17, in overtime.

Outside of another average offensive performance for the black and gold, it was the defense’s turn to come up small in big spots, getting worked over in the run game all day long, resulting in a disappointing and frustrating 6-point road loss to one of the worst teams in football.

Like I do every week, I’ll take a shot at grading Pittsburgh’s performances via position groups.

I know a lot of the blame will somehow get placed on Ben Roethlisberger for this loss and for the ineptitude of the Steelers’ offense on Sunday, but outside of a bad sack on the last drive in regulation, the strip sack fumble and a throw that should have been picked by Kyle Fuller, I think Roethlisberger was decent enough for the Steelers to win.

The strip sack in the first quarter was all on Ben. He has to feel that pressure and either pull the ball down and take the sack, or throw the ball away 10 rows into the stands. He did neither, giving Chicago the ball. On the final drive of the game he nearly had a throw picked by Fuller looking for Antonio Brown, and he took an awful sack with no timeouts left. Throw the ball away and give yourself one last chance.

Overall, he continues to struggle with the deep ball, but in the second half we saw him become more patient, hitting the crossing routes to guys like JuJu Smith-Schuster and Brown, but for the third straight week we’ve yet to see the standard version of Ben in this high-powered offense, and that’s starting to become increasingly frustrating.

For the second straight week, Le’Veon Bell continues to look like his old self, and that showed once again on Sunday in Chicago.

Granted, Bell didn’t rush for 100 yards, but he did average 4.0 yards per carry on the ground and a touchdown, adding another 37 yards on six receptions. We’re staring to see the trademark patience return with Bell, and he’s becoming more and more comfortable in the run game. I’d have liked to see the Steelers feed him the ball a bit more on Sunday on the ground, but I’m not calling the plays.

Bell did have a big drop in the flat on the last drive of regulation, but at this point I’m not sure that even matters in the context of the game.

Brown came through with another big game for the Steelers, finishing with 10 catches for 110 yards and a touchdown, but unlike in Cleveland, it wasn’t enough to drag the Steelers’ offense to a productive day as a whole.

Outside of Brown, Martavis Bryant struggled for much of the day, hauling in just two passes for 30 yards, but he did have one catch-and-run wiped out by a penalty and had another missed call in the first half on a deep shot where Prince Amukamara mugged him down the field.

Rookie JuJu Smith-Schuster got involved in the passing game this week again, hauling in two passes for 39 yards in the loss, including a nice 25-yard catch-and-run off of a crossing route. He was even targeted in the red zone on a post route that was broken up. It seems like Ben and the Steelers are putting more and more faith in him offensively.

One guy who didn’t receive much faith on Sunday was Eli Rogers, who muffed a punt early in the game, leading directly to a Steelers touchdown. After the muffed punt, Rogers didn’t even receive a target offensively. I can’t quite remember him even being on the field much offensively.

This grade is largely going to the effort Vance McDonald displayed on the blocked field goal to end the first half. He never quit on the play and was able to strip the ball from Marcus Cooper’s hands, negating a possible touchdown.

That will endear him to teammates and the coaching staff moving forward.

Third-year tight end Jesse James had a decent game despite missing parts of the game due to a shoulder injury. He hauled in two passes for 19 yards, one of which included taking a big shot to his left shoulder, forcing him to exit the game.

I loved the way he hung in there though on the play, coming down with the ball just short of the sticks.

Outside of a poor second half for fill-in right tackle Chris Hubbard, I thought that this unit up front was mostly solid against the Bears, especially after backup guard BJ Finney came in to replace the injured Ramon Foster in the first half.

Alejandro Villanueva seemed to have a nice bounce back game on first glance, while Maurkice Pouncey and David DeCastro did a nice job in the running game, helping the Steelers average 4.1 yards per carry on the day.

In the second half, Hubbard gave up a sack in a tough spot and was later called for a holding penalty, playing a big role in stalling another Steelers drive.

I know that the Bears rushed for 220 yards on Sunday, but I’m not putting that blame on the guys up front defensively.

Cam Heyward, Javon Hargrave and Tyson Alualu did their jobs well, holding up blockers and playing their gaps most of the day. Sure, they didn’t penetrate the backfield like they have the last two weeks, but they were assignment sound.

Combined, the starting unit up front registered eight tackles and one sack, which was a brilliant display of power from Hargrave.

My grade my drop slightly once I see the coaches film, but watching live I thought the defensive line more than did its job Sunday.

Ryan Shazier led the way with 11 stops, but I couldn’t pretend to keep an accurate count of missed tackles in the loss. Yes, Shazier was great in the first half flying sideline to sideline, also coming up with a fumble recovery, but something changed as the game wore on. He was sloppy in his angles and egregious in his tackling attempts.

Vince Williams was actually worse, turning in his worst game as a starting, punctuated by him easing up on Tarik Cohen’s long run that nearly ended the game in overtime.

Coaches film and the missed tackles report won’t be kind to VW.

At outside linebacker, Bud Dupree missed a handful of tackles in the backfield on Jordan Howard and was largely irrelevant as a pass rusher against Bobbie Massie at right tackle.

Fortunately, Anthony Chickillo came to play Sunday, filling in for an injured TJ Watt. Chickillo recorded a sack and was hard to handle as a pass rusher, often getting held without a call throughout the game.

On Chicago’s second touchdown, it looked like Tyler Matakevich bit on the play-action fake, completely abandoning his pass coverage responsibilities to leave rookie tight end Adam Shaheen wide open in the back of the end zone.

I know that the Bears’ wide receiving corps had just one catch on the day, Mike Glennon threw for just 84 net yards and JJ Wilcox picked off one pass, but this grade is more reflective of the horrendous run support throughout Sunday’s game.

Artie Burns had one of the worst run support plays in overtime that I’ve seen from a Steelers cornerback in quite some time, while guys like Mike Mitchell, JJ Wilcox and Joe Haden were slow to react at times to running plays from the Bears.

Mostly, the running woes are on the linebackers, but there was just some awful run support from the secondary.

And don’t get me started on the holding calls missed by the officiating crew in overtime. Haden was tackled, allowing Cohen to get to the edge, while Burns was held on Howard’s touchdown.

For the Steelers’ defense to take the next step, the secondary needs to become much better at run support. Sunday was a gross display in the opposite direction for that group.

That blocked kick before halftime was awful; not entirely sure what happened on the left side of the line to allow the Chicago player to come in free like that, but as I said earlier I loved the hustle from McDonald to chase Cooper down.

Boswell did bounce back after the block, drilling a 32-yarder, while Berry averaged 40.6 yards per punt in the loss, but the Steelers’ special teams led directly to 10 points on Sunday as Rogers muffed the punt and the blocked kick ended in a field goal for Chicago.