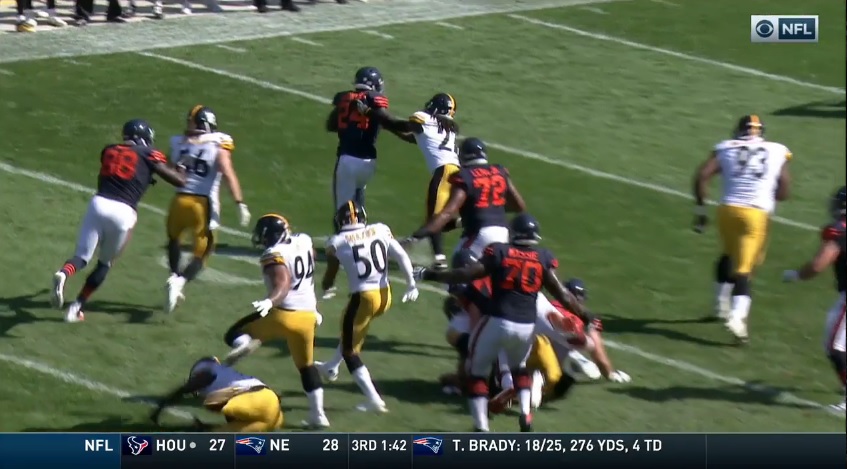 Sunday’s game at Soldier Field was one of the ugliest one’s I’ve seen from the Pittsburgh Steelers in my time as a fan, dating back to 1995, when I can first remember Steeler football becoming a serious part of my life.

Against the Chicago Bears, the Steelers simply didn’t show up in any phase of the game, especially in the tackling department, putting on a display that even a pee wee football team would be embarrassed of.

I know the 24-hour rule has passed when it comes to moving on from losses, but it’s time to dig into the missed tackles report.

Let’s jump right into it.

If Tarik Cohen’s touchdown in overtime had counted, the missed tackles number from Sunday would have jumped to 26 as Mike Mitchell, Vince Williams and Artie Burns all whiffed AFTER Cohen stepped out of bounds.

In the 2+ years of me doing this report each week during the season for Steelers Depot, this is easily the highest number of missed tackles by a Steelers defense that I’ve seen.

Sunday was just an awful performance in the most important part of playing defense for the Steelers’ defense, which was getting some publicity after two weeks about possibly being the most underrated defense in the NFL.

Welp, this one will be painful.

This play right here let me know that Sunday’s game was going to be poor from a tackling perspective, even if I didn’t know that it would be THAT bad.

On this stretch run late in the first quarter by Jordan Howard, both Bud Dupree and Williams go for the big shots in the open field. Howard, a powerful back who doesn’t go down easily, bounced off both hits. While the two big shots did slow him down, they didn’t finish the job, which seems to be the problem with the defensive group as a whole.

This is easily one of the most egregious displays of tackling I’ve seen from the Steelers, period.

Third down near midfield, and four (!!) guys get a crack at Howard well behind the line. Unfortunately, none of the four are able to finish off Howard, allowing him to bounce off of each missed tackle before flopping forward for a first down.

Williams, Cam Heyward, Sean Davis and Anthony Chickillo all have clean shots. All have played well for the most part this year, but all four came up small in a big spot.

Last week in the offensive scouting report I put together with Alex, I mentioned how important it was to be disciplined against Cohen, taking good angles, breaking down for the tackle and wrapping up. The Steelers clearly didn’t heed that advice.

This is just a short dump-off from Glennon to Cohen, but watch how both Ryan Shazier and Dupree come in out of control, taking sloppy angles to the diminutive running back in space.

Off of one subtle move, Cohen leaves Shazier off balance and grasping for air, while Dupree nearly falls backward trying to tackle Cohen. Fortunately for Dupree, LT Walton came through to clean up the tackle attempt, limiting Cohen to minimal damage.

There are a number of other plays I could bring up from Sunday’s game to highlight some missed tackles, but I thought these were some of the worst out of the bunch.

Twenty-three missed tackles … oh my. One week after singing the praises of the defensive unit’s ability to tackle, this week I’m left dumbfounded.