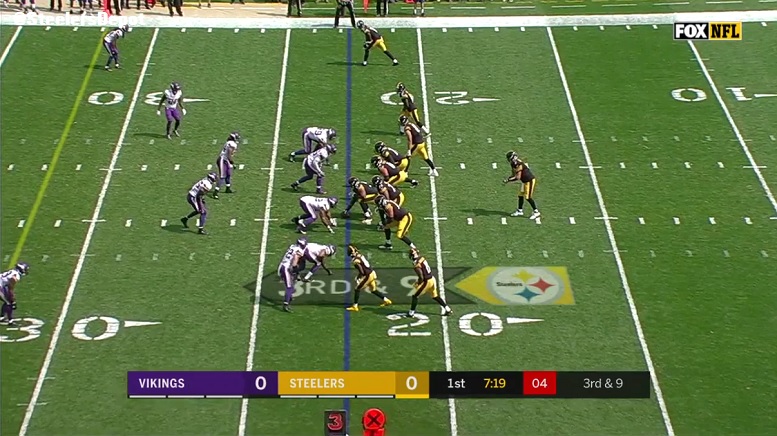 In the Pittsburgh Steelers Week 1 win over the Cleveland Browns, the team’s offense ran a total of nine offensive plays that included four wide receivers and one tight end being on the field at the same time. That 01-personnel grouping meant no running backs were on the field and many wondered if we would see more of that on Sunday against the Minnesota Vikings.

In short, the Steelers only used their 01 personnel grouping just once against the Vikings as the offense had one running back on the field for 73 of their 74 total offensive plays. By the way, that one play Sunday was a completed pass to wide receiver Antonio Brown for a gain of 8 yards.

While Steelers quarterback Ben Roethlisberger did say this past Wednesday that we’re likely to see more four-wide receiver sets used moving forward in effort to get rookie JuJu Smith-Schuster on the field, our very own Matthew Marczi wrote a few days ago that he didn’t expect to see that happen much against the Vikings on Sunday.

“What I’m trying to say is that I would not expect it to be the norm that the Steelers favor the 01 package over the 10 package, and I would expect Bell to see snaps on the field with four wide receivers as early as tomorrow at home against the Vikings,” Marczi wrote.

Several are probably wondering how many times the Steelers lined up Bell as a wide receiver against the Vikings in addition to having an empty backfield. In total, the Steelers ran four offensive plays using Bell lined up as a wide receiver and one of those plays was wiped out by a defensive holding penalty. The other three plays, however, were completed passes by Steelers quarterback Roethlisberger for 20 yards gained in total.

Which way will the Steelers offense go from here when it comes to taking their running backs off the field in lieu of an extra wide receiver. While it’s hard to know for sure, I will be surprised if we see another game this season where they use their 01 personnel grouping as much as they did in Week 1 against the Browns. Regardless, we’ll be tracking the offense to see how often it happens.