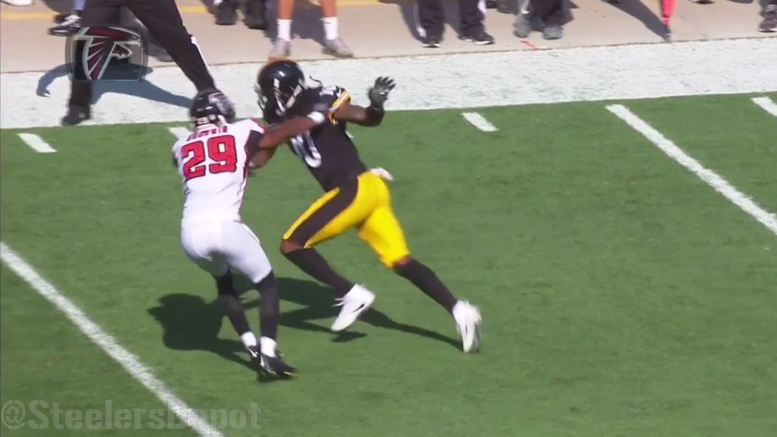 Remember C.J. Goodwin? He’s now a cornerback with the Atlanta Falcons but a few years ago, he was a wide receiver with the Pittsburgh Steelers. He originally signed with the Steelers in June of 2014 after being given a tryout thanks to the urging of Hall of Fame cornerback Mel Blount.

Goodwin spent his entire rookie season on the Steelers practice squad and was ultimately signed to a futures contract in 2015. After failing to make the Steelers final 53-man roster in 2015, Goodwin was waived. He stayed unemployed until November when he was signed to the Atlanta Falcons practice squad and his position switch evidently began not long after that at the urging of Falcons defensive backs coach Marquand Manuel.

As it turns out, the Steelers tried to convert Goodwin to a cornerback prior to waiving him in 2015.

“We had C.J. Goodwin here a number of years ago as a wide receiver, and we approached him about playing defensive back,” Steelers head coach Mike Tomlin revealed on Saturday during an interview with Bob Labriola of steelers.com. “He was initially resistant, maybe fearful of it. Not a lot of exposure to the position, and so it was funny watching Atlanta in the last Super Bowl and seeing C.J. lining up and playing cornerback on the biggest stage.”

Last season, Goodwin played in 14 regular season games with the Falcons as a cornerback and even made one start. He also played in all three of the Falcons playoff games last year. In the Super Bowl, he registered three total tackles and a pass defensed. In this years Falcons regular season opener, Goodwin also played and he figures to play Sunday night against the Green Bay Packers.

It’s too bad the Steelers couldn’t get Goodwin to switch positions while he was with them as the team sure could have used his services on that side of football last season. At the very least, at least we now know that they did indeed try to get California, PA product to switch positions.