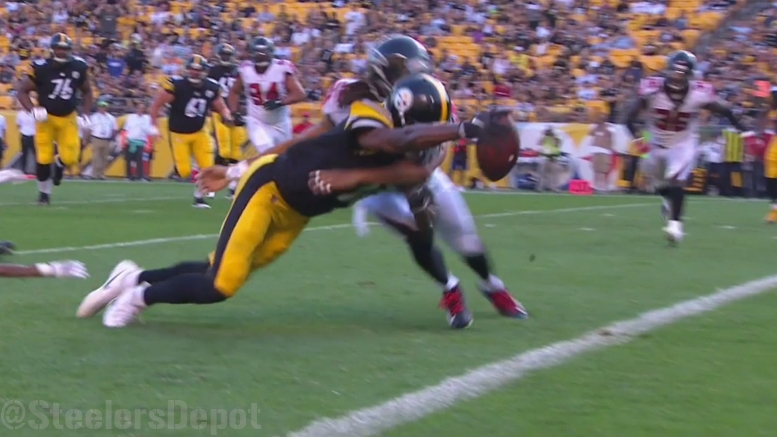 I think that it is common knowledge within this community that keeping Justin Hunter on the 53-man roster was not my preference because I had a hard time envisioning him even seeing a helmet on game day due to the fact that he does not contribute on special teams. He has four snaps on special teams during his four-year career.

But now that the Pittsburgh Steelers have chosen to keep him, I am wondering, as well as hoping, about his future with the team this season. They have him at their disposal, so I hope that they have a plan to use him.

While it would be hard to argue that a player who has 12 touchdowns in a four-year career has some sort of innate feel for the end zone, he does have an obvious skill set that inclines itself toward use in that area—that is, scoring touchdowns—and that is something that quarterback Ben Roethlisberger and wide receiver Darrius Heyward-Bey have talked about in the past.

I don’t know how to work it out off the top of my head to get Hunter a helmet without injuries playing a factor, but if he is dressed, he should have a situational role at the least as a red-zone target. There is rather little motivation not to utilize him in this regard.

Do you remember Derek Moye? You might, as he was a Penn State product. He spent some time on the Steelers’ 53-man roster in 2013 and even got into a few games. The 6’5” wide receiver got some situational work early in the season, which included a one-yard touchdown in the second game against the Bengals.

So there is at least a precedent for the team displaying a willingness to use a bottom-of-the-depth-chart player in situational roles, regardless of the fact that it will be difficult to swing six wide receivers dressing for a game, and all five other wide receivers are guaranteed to dress over him either for having bigger roles on offense or because they contribute on special teams.

Hunter did have a red-zone touchdown during the preseason, though it was not of the variety that one would think throwing to a tall wide receiver. He was actually thrown short of the goal line and had to beat the defender to get the ball across the plane for the score.

But he did display his ability to contribute in the red zone during training camp, and does have some numbers to back it up. According to Pro Football Reference, he has been targeted 18 times inside the red zone in his career, yielding nine receptions with six touchdowns and two additional plays that resulted in first downs.

And we know, of course, that he dealt with largely below-average quarterback play. But last year with the Bills, he did see three of his six targets result in scores while playing there, catching three of five targets from Tyrod Taylor, all for scores. His one red-zone target from Marcus Mariota also resulted in a score. Some things to think about.