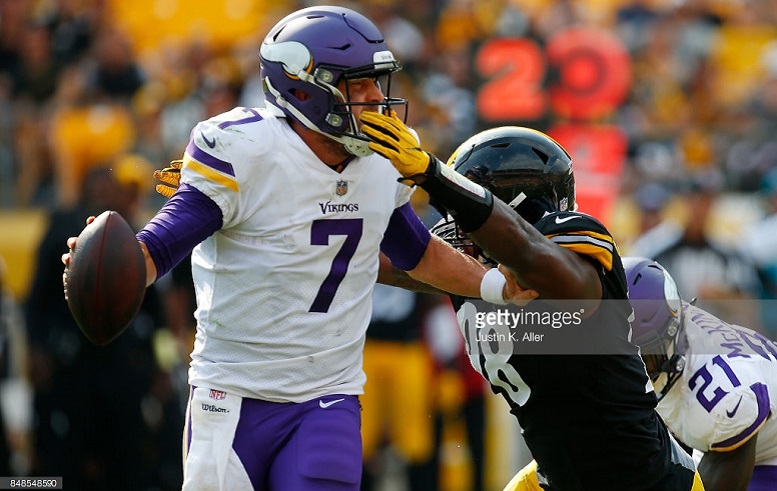 With two more sacks Sunday against the Minnesota Vikings, the Pittsburgh Steelers have now gotten to the quarterback nine times this season. Through two games, the Steelers are tied for second in the league in sacks, only falling short of the Jacksonville Jaguars (who incredibly have 11). The Steelers’ pass rush is off to an unusual fast start this season – in fact the last time a Steelers’ defense had recorded nine or more sacks in their first two contests was a decade ago in 2007 (10 sacks).

While Harrison was a big factor in the Steelers’ relentless pass rush in the first few weeks of the 2007 season, being credited with 1.5 of the team’s 10 sacks, the veteran linebacker has taken a backseat to start the 2017 campaign. Harrison has logged just four snaps this season, with all four coming in the opener against the Browns.

Though Harrison may not be a part of the defense’s sack parade like he was a decade ago, this has not been problematic like in year’s past. This is due in part to the Steelers sharing the wealth in their pursuit of the quarterback.

The Steelers have split their nine sacks to seven different recipients this season, with Anthony Chickillo and rookie linebacker T.J. Watt enjoying the biggest piece of the pie with two sacks each. But while many have already dug into the defense’s sack pie, fear not because there is a lot more to go around.

Inside linebacker Ryan Shazier has yet to get home on the quarterback but has been close on numerous occasions. The same can be said for currently injured Stephon Tuitt. The newly signed Tuitt sprung in the backfield on his only two snaps of the season and you can expect that to continue upon his return. And of course, there is still the freshly kept Harrison, who is presumably waiting for his opportunity to devour fatigued linemen later in the season.

The franchise all-time sack record through the first three games belongs to the 1983 Steelers with 17 sacks. And while the likelihood of the current defense reaching that mark is extremely unlikely, the team could tie the 2007 Steelers with a three-sack game against the Chicago Bears Sunday. The Bears have allowed five sacks this season, giving the Steelers an ample opportunity to allow more members into their pass rush party.