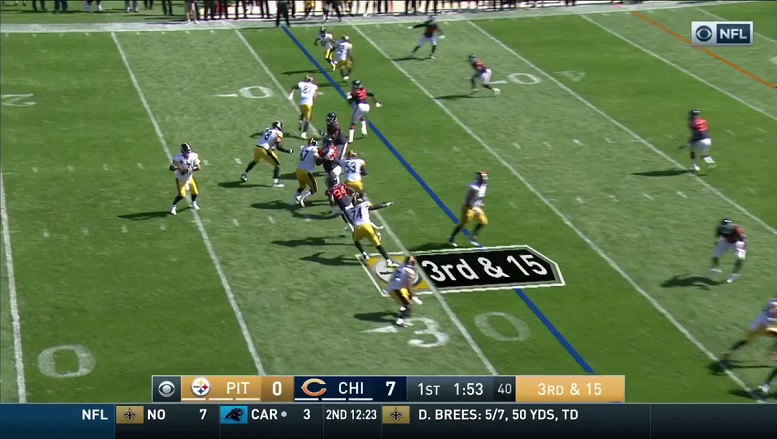 The Pittsburgh Steelers offense certainly has unperformed thus far in the team’s first three regular season games and while there’s no one clear thing that needs to be fixed in order for that unit to improve, I think I should be able to show you one area they’ve been suffering in so far.

When you look at the Steelers current offensive third down conversion percentage of 32.43, you can obviously tell there’s a problem there. Even so, that percentage really doesn’t tell the whole story.

In total, the Steelers offense has faced 37 third downs so far this season and converted just 12 of them. What you may or may not find surprising is that 21 (56.8%) of those third downs needed 7 or more yards. Entering Week 4 of the NFL regular season that 56.8 percentage is the sixth-highest in the league. Of those 21 third down plays of 7 yards or longer, the Steelers offense has converted just twice. YUCK!

So, what has led to the Steelers offense facing so many 3rd and longs so far this season? It’s really probably not hard to figure that out, right?

For starters, one of those 21 third down and longs can be thrown out as that series of downs started and ended with kneel downs.

Two other third down and longs were set up by penalties on either first or second down.

One other third down and long was because of a sack.

Seven other third down and longs came after first down run fails that were followed up by either another failed run or an incompleted short pass on second down.

Two other third down and longs included failed runs on first followed by incompleted deep passes on second down.

One other third down and long was set up by back-to-back incomplete deep passes on first and second down.

I’m not going to through the remaining combinations, but they either involved back-to-back incompleted short pass attempts or a failed run after an incompleted first down pass.

The Steelers weak first down running game has played it’s part in making it tough for the offense. In fact, of the 32 first down rushes the offense has had in their first three games, only 10 of them (31.3%) are deemed successful ones.

In short, the Steelers offense has stayed behind the chains quite a bit so far this season. When they get ahead of them, however, it’s a different story and especially when they face third downs of 6 or fewer yards to go. On those 16 third down plays needing 6 or fewer yards, the Steelers offense has converted 10 of them into first downs. That 62.5% conversion rate is eighth-best in the NFL in those situations.

Moving forward, the only way the Steelers offense is likely going to improve is if they start getting themselves in more manageable third downs. If they have a run or pass fail on first down, Ben Roethlisberger probably needs to think twice about throwing deep on second down.

On Tuesday, Roethlisberger admitted during his weekly radio interview that he likely needs to start doing a better job of taking what the opposing defense gives him. Gaining four yards in total on first and second downs doesn’t sound like it should be that challenging but as you can clearly see, the Steelers offense has failed to do just that too many times so far this season.