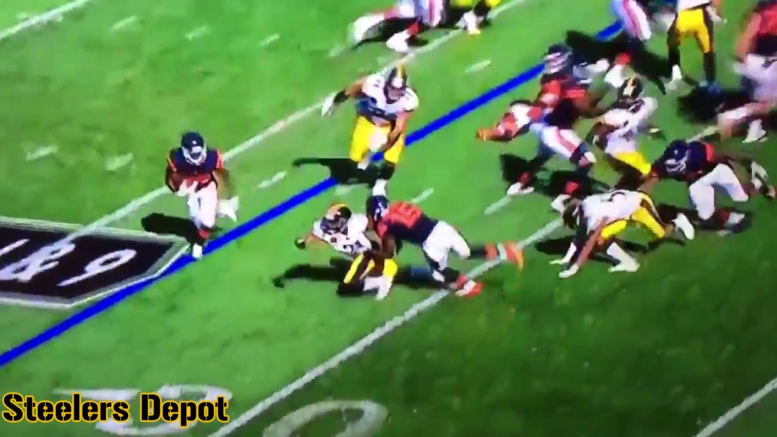 The Pittsburgh Steelers dropped their first game of the season on the road to the Bears; Chicago has historically been a terrible place for them to play, winning just one of 14 games now in the city. But this one was particularly ugly, and the worst part about it was the finish.

While the Steelers’ run defense has absolutely nothing to be proud of on the day, the fact must be addressed that the officials in overtime missed not just one, but two critical holding penalties on long runs by the Bears in the overtime period, the second of which was the game-winning touchdown on the opening possession.

By way of simplification, it goes without saying that there are many things the Steelers could have done to avoid putting themselves in this situation. The offense did not play well throughout most of the day, with Antonio Brown as usual the only consistent performer.

But given the way that the game ultimately came down, it is incredibly unfortunate that it had to end in such a fashion. It doesn’t mean that, had it not happened, the Steelers would have won. But at least they would have had an opportunity.

I’m not one to spend a lot of time harping on officiating, but those critical non-calls provided the difference in the game, so they need to be discussed. Chicago rattled off key plays of 36 yards—which nearly ended the game on a score all on its own—followed by the 19-yard game-winning run for a touchdown on plays on which clear holds by the offense directly enabled the play to unfold as it did.

On the second offensive play of overtime, running back Tarik Cohen was able to cut back a run to the right side and catch the sideline for 36 yards. The officials ruled that he stepped out of bounds at the 37-yard line; he otherwise would have scored.

The problem is that the officials missed a hold on cornerback Joe Haden, who was the perimeter backside defender on the play. Replay indisputably shows that the defensive back had his jersey held on to just two yards beyond the line of scrimmage, the blocker turning him and spinning him to the ground.

A couple of plays later, from the 19-yard line—admittedly with an18-yard run allowed in between—a Jordan Howard run off left tackle made it into the end zone to seal the victory for the home team, their first of the season.

And the only problem with this one is that Artie Burns was, again, indisputably held within the five-yard line. It can be reasonably argued that, had he not been held, he could have prevented a touchdown on the play, which would have kept the game alive.

So much about this game was ugly for the Steelers, most of it self-inflicted. But when the officiating has to play a role in the outcome as well, it is extremely unfortunate, to say the least.