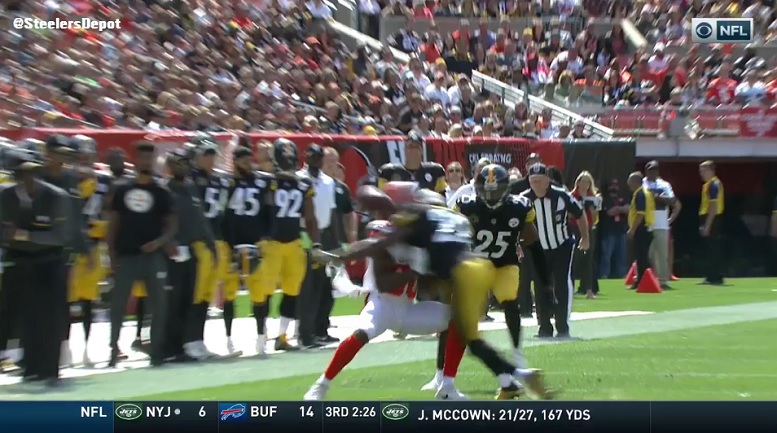 It was reported earlier on Friday that Pittsburgh Steelers linebacker Ryan Shazier has been fined nearly $25,000 for his Sunday late hit on Cleveland Browns quarterback Deshone Kizer. However, as it turns out, Shazier wasn’t the only Steelers player to be fined for actions in that Week 1 game.

According to Ray Fittipaldo of the Pittsburgh Post-Gazette, Steelers cornerback William Gay and safety J.J. Wilcox were also fined nearly $25,000 each for their penalized hits in the game against the Browns.

William Gay and JJ Wilcox also funded $25,000 by the NFL for their penalties versus the Browns

Gay’s fine comes as a result of his sideline hit on Browns wide receiver Ricardo Louis with 4:16 left in the third quarter of Sunday’s game. While Gay was penalized for unnecessary roughness on that play, the flag was thrown late and seemingly after the referees saw a replay of the hit on the stadium jumbotron. On the play in question, Louis bobbled the football just before Gay made contact with his head and neck area.

Wilcox being fined is also not a big surprise. His helmet-to-helmet hit on Browns wide receiver Corey Coleman happened with 3:40 left in the game and immediately after the Cleveland player had caught a 3-yard touchdown pass from Kizer. Wilcox was injured due to that hit and was listed by the Steelers as having a concussion on the team’s injury report this week.

On a positive note, Steelers rookie outside linebacker T.J. Watt was not fined for his perceived late hit on Kizer at the conclusion of a sack by fellow outside linebacker Anthony Chickillo with 1:40 left in the third quarter. Even so, Watt and the Steelers were penalized 15 yards for unnecessary roughness on that play.

While not yet stated, it wouldn’t be surprising to ultimately learn that Gay and Wilcox appeal their fines as that has become customary as of late.