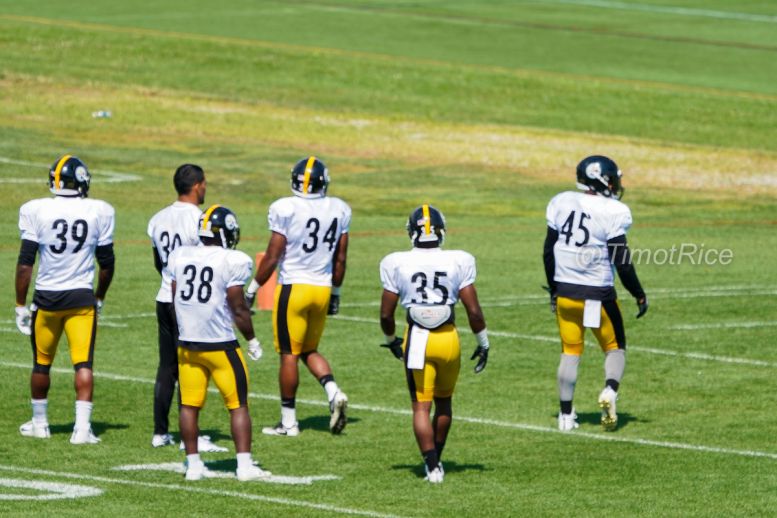 They are the giant sequoia of the NFL. The Pittsburgh Steelers certainly have traits they look for at certain position. Big, fast receivers. Long, physical corners. And running backs who look like they could play linebacker. The latter is the focus today, Pittsburgh’s final 53 man roster confirming what we already knew.

Here are the sizes of the three running backs the Steelers kept on the roster.

I’m not sure if you’re going to find a bigger backfield than that. Gone are the days of the third down scat back. You the failed experiments of Dri Archer and Chris Rainey for that. Pittsburgh has changed course and gone all-in on size, though it’s a trend that’s existed under the Mike Tomlin era.

They’ve drafted Rashard Mendenhall who wasn’t as tall but thickly built (though his play never matched the size). Jonathan Dwyer was a similar story. Ditto Bell, Conner, and now adding Watson. Heck, even Knile Davis in the offseason followed that philosophy.

Look at the photo above. In the foreground, the two smallest backs on the camp roster, Trey Williams (#35) and Brandon Brown-Dukes (#38). They had limited chance to run the ball, not trusted as a between-the-tackles threat. In the background, three of four of them are currently Steelers and the other, Davis, was once the favorite.

So in the end, seeing someone like Watson make the roster isn’t a major surprise. Not only did his play warrant it but it gels with the Steelers’ mindset. Big, bruising running backs who can win the war of attrition. He garnered attention during the goal line period of training camp, the final team period of the Heinz Field practice. Davis and the first team were stuffed on the first four plays. Watson came in and found the end zone on all three of his tries, going through and around the Steelers’ defense. From there, he became the clear #3 back in camp and eventually, pushed out Davis and Fitzgerald Toussaint too.

Tomlin always preaches about being the better conditioned team and winning the fourth quarter. That’s what bigger backs bring to the team. Closers, guys who can dominate in a game-ending, four-minute drive. In future camps, keep an eye on those who stand above the rest. Literally.

In a league that places a focus on speed, the Steelers are branching off in their own direction. For running back, at least.