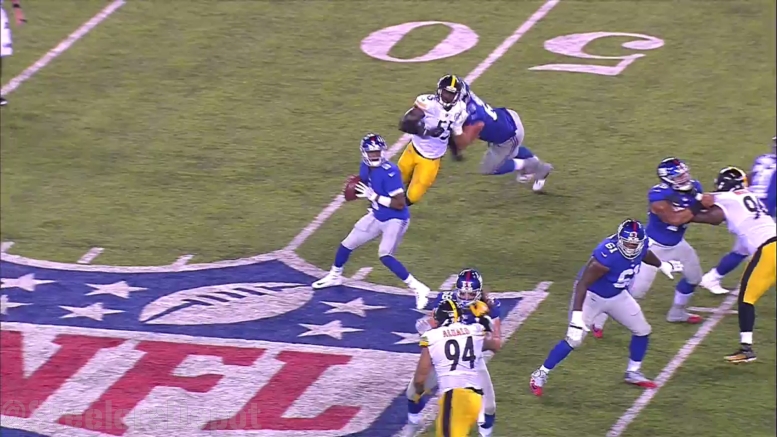 By the time that the Pittsburgh Steelers take the field on Sunday against the Browns, there is a fair chance that they are going to have on their roster a pair of backups who will constitute a base salary this season of at least $2 million on the defensive side of the ball.

The more egregious of the two comes at the outside linebacker position, where the Steelers have rostered five players at the position, with a sixth on the practice squad and a seventh on injured reserve. I’m sure some of you already saw where I was going with this, but perhaps the team should be looking to ask eighth-year veteran Arthur Moats to take a pay cut.

In the final year of a three-year deal, Moats is projected to play by far his least significant role in four total seasons with the Steelers. In fact, there is a reasonable chance that he is a gameday inactive for most of the season, depending on how the rest of the roster breaks.

With T.J. Watt starting on the right side and James Harrison backing him up; with Bud Dupree starting on the left side and Anthony Chickillo backing him up: where are the snaps for Moats? Not that there is anything wrong with him as a player, but there are clear disadvantages to having him on the roster in his role at his current salary.

For one thing, with the numbers coming in from all of the trades and signings that the Steelers made over the course of the past couple of weeks, Pittsburgh is now far closer to their salary cap than many might expect. According to Over the Cap, their latest updated numbers, for example, have their top 51 figure at just $2,811,742 below the cap.

This is a bit of a spoiler alert, but that is not enough. It’s probably just barely enough for what they would like to carry into the regular season for emergencies, and it’s definitely not enough to work out an extension for Stephon Tuitt.

So it’s time for the Steelers to trim some numbers here. They still have to release a player, so one way they might consider doing it is to release the player with the biggest contract who is projected to have the smallest role: Moats and his $2.25 million base salary.

If he is not going to be released outright, then he should take a reduced salary, and if William Gay is going to be demoted to working as a dime back, then I would like the Steelers to consider asking him to reduce his $2 million base salary as well.

I know that Dave Bryan was more optimistic than I was yesterday about the team’s salary cap situation, but if they don’t make some cap-saving cuts or reductions, then it seems to me a restructure is inevitable. That would not be all that bad of a thing, but it is something that seemed rather unlikely to be needed even a month ago.

That is of course if they want to get a deal done with Tuitt. Adding Joe Haden, Vance McDonald, and J.J. Wilcox added more than $8 million, minus displacement, to their salary cap, and their five players on injured reserve do not help.