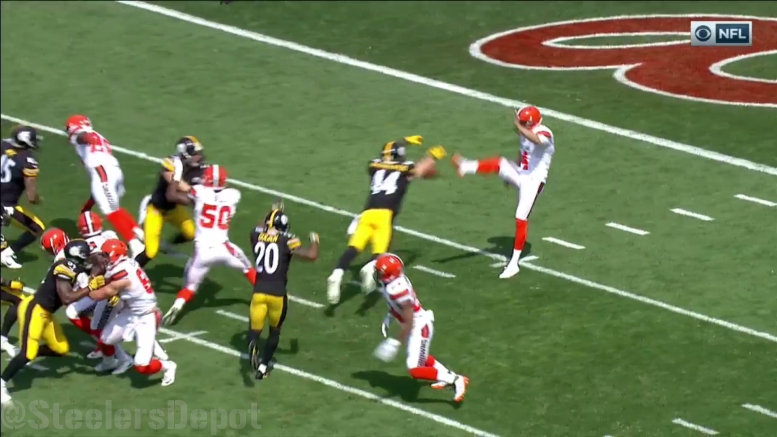 I hope the members of our community who were ready and willing to run the Pittsburgh Steelers’ special-teamers out of town in order to preserve their favored member of the 90-man roster were watching yesterday’s game. It is important to understand what sort of impact special play on special teams play can have on the result of a game.

And it is quite fair to say that had the Steelers’ special-teams units not played as they did against the Browns in the regular season opener, they may well have come back to Pittsburgh with a loss. Thanks to the combination of a blocked punt from Tyler Matakevich and the subsequent recovery by Anthony Chickillo, Danny Smith’s units provided the margin of victory and then some.

While Chickillo did start yesterday’s game, he is ultimately a depth outside linebacker and will be when Bud Dupree actually plays. That means that he is a special teams player. And while Matakevich may have been moved up to the top reserve spot at inside linebacker, ultimately, his job on a weekly basis is to play on special teams.

It was simply yet another reminder that the results of the non-offensive, non-defensive plays on special teams continue to matter in the end result of games, which can literally separate wins from losses. On Sunday, the Steelers’ special teams play clearly turned in a winning performance, and have generally had a strong showing going back through the preseason.

To show you how seriously the Steelers take their special teams play, consider the fact that for Sunday’s game, the team’s primary two jammers on the punt return unit were actually their starting cornerbacks, Artie Burns and Joe Haden. This will probably not be a weekly thing, but it shows they are willing to play virtually anybody to succeed.

Through much of the afternoon, the Browns also really put the pressure on the Steelers’ gunners on the punt coverage unit, frequently lining up on either side with vice jammers. Darrius Heyward-Bey’s ability to split double-teams in this area proved valuable on the day in covering talented rookie returner Jabrill Peppers.

Even something as small as having the appropriate mechanisms in place for the players to understand how to communicate to their teammates that they are in danger of touching a punt and exposing it to a change of possession are critically important.

The Browns were able to pin two punts deep in Steelers territory because they were punting from a short distance, which means that there were a lot of bodies in a confined area. The second punt took a sharp bounce forward and returner Eli Rogers had to be directed away from the direction of the returning ball.

Because of the devaluation of special teams roles, something that I want to do this season is to track some of the contributions in this area that are important but don’t get quantified in statistics on a weekly basis. Some I will be able to quantify, like downed punts or induced fair catches, but others I will just have to describe.