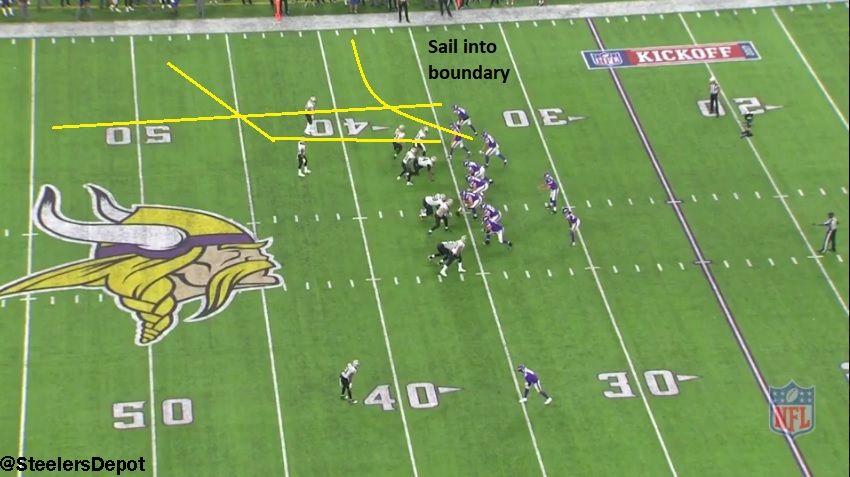 Dalvin Cook has breathed fresh life into one of the worst rushing attacks last year. After a slow start in Week One against the New Orleans Saints, Cook got better as the game went on and wound up setting a Vikings’ rookie rushing record for a debut.

It’s an offense that can work inside and out. You’ll get sweeps on the perimeter to the field and your classic inside zone. Most of this is done out of one back, and 11 personnel but they will mix in a fullback. #30 C.J. Ham will handle those duties.

Against the Saints, they used pistol three times. All three times were a zone run to the field (far side). Two inside zone, one that looked like outside zone. So possible tell there.

Saw them use a tackle-over once. Right tackle Mike Remmer shifted over to an unbalanced look. 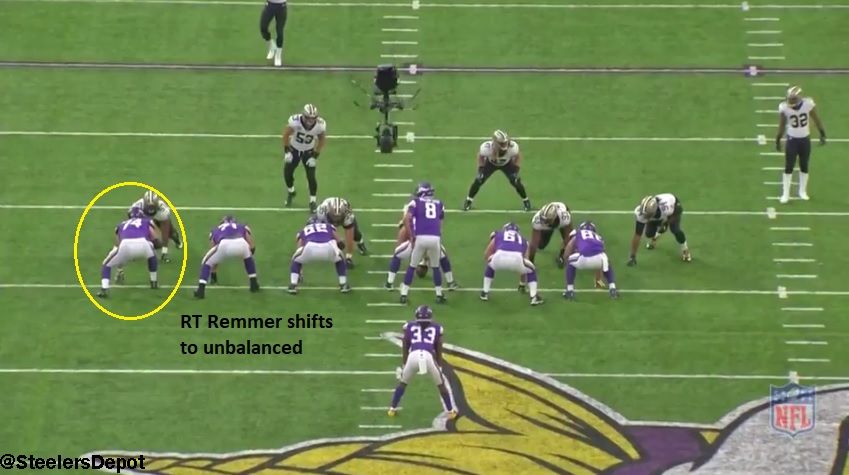 David Morgan (#89) will come in as the Vikes’ #2 TE. Latavius Murray is Cook’s technical backup but barely saw the field last week and fumbled the first carry he received. Jerrick McKinnon is a quality third down back and a threat in the open field.

It exploded last week and Sam Bradford had one of his best games ever. Yeah, it was the Saints’ defense but if you watched, you saw the dimes Bradford was throwing. Not a fluke. I like their passing concepts. Win with scheme and also talent.

The Vikings aren’t afraid to FIB – formation in boundary. Like bunch sets for spacing concepts. Sail is one of their favorites. Formation into the boundary, bunch to the top, and they run sail (vert/corner/flat). 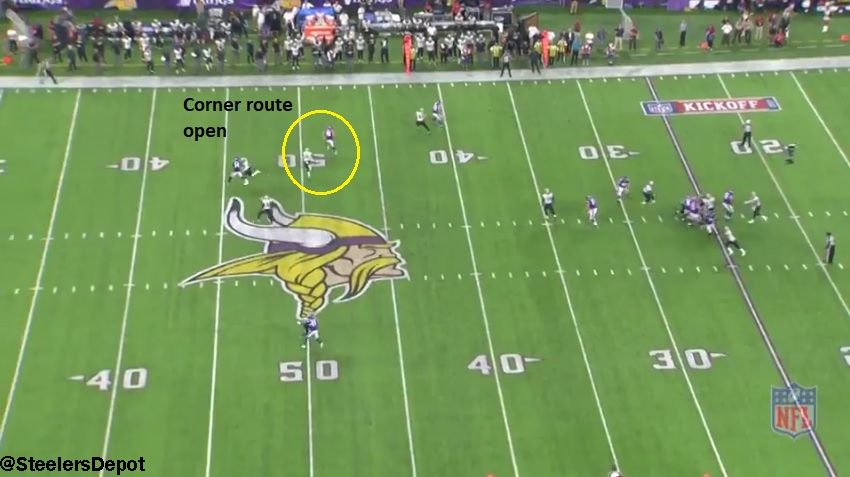 Like we talked about with the Browns last week, an idea that seems popular over the entire league (including Pittsburgh) lot of false keys by pulling guards on playaction. Similar to Pittsburgh, they’ll run a Hank concept (curl/flat) on 1st and 10. Efficient, simple concept to put themselves in 2nd medium/short.

Red zone/red zone fringe concept to key in on. Mirrored smash (corner/curl). Saw it twice, once at the 24, the other at the 15.

Be weary of hitting Diggs on underneath crossers/mesh concepts on third down. Again, bunch looks to create a free release. Diggs can run away from man or settle vs zone. Big threat.

The reigning NFC Offensive Player of the Week in Sam Bradford and the explosive Minnesota Vikings’ offense rides into town Sunday afternoon to Heinz Field for a matchup with the Pittsburgh Steelers in Week 2.

Over the last few years, Bradford has caught a lot of flak for his inability — at times — to live up to the billing of a No. 1 pick. Coming out of Oklahoma, Bradford was supposed to be a can’t-miss, franchise-changing quarterback, but injuries ruined some on his time with the then-St. Louis Rams.

Fortunately for Bradford, a trade to the Philadelphia Eagles and Chip Kelly seemed to change his career, which then led to a trade to the Vikings, where he’s looked outstanding in 17 total starts.

Last season, Bradford set an NFL record for completion percentage in a season with a 71.6 percent rate, while recording 20 touchdown passes and just five interceptions on an offense that saw its offensive line decimated by injuries and a backfield that struggled to establish a consistent running game to take heat off of Bradford.

If Week 1 against the New Orleans Saints on Monday Night Football is any indication, the Vikings are for real this season.

Against a rebuilt New Orleans defense, Bradford sliced and diced them through the air, firing strikes all over the field. Sure, you can use the argument that it was the Saints’ defense, but that’s missing the entire point. If you watched even one throw of Bradford’s, he was on point all night long.

During his time in St. Louis, Bradford was hesitant to stay in the pocket long enough to get a pass off while taking big shots. That’s change over the last few years.

Coming off the play-action fake, Bradford climbs back up into the pocket to deliver a strike to Jarius Wright between two defenders, all while taking a big shot from Saints defensive end Cam Jordan.

When given time in the pocket to survey the field, Bradford is a tough quarterback to deal with thanks to his impressive accuracy.

With Bradford dealing under center, the Vikings’ offense has taken the next step. Adding in rookie running back Dalvin Cook out of Florida State in the second round has really given Minnesota’s offense another spark.

It’s still pretty ridiculous to me that Cook — arguably the best back in the class over Leonard Fournette and Christian McCaffrey — fell as far as he did, but the Vikings are certainly happy.

A dual-threat running back, Cook simply set the rookie rushing record in an NFL debut for the Vikings against the Saints, rushing for 127 yards, surpassing former Viking great Adrian Peterson — who was on the other sideline with New Orleans — in his first NFL game.

It’s not as if Cook is a gimmick running back. He loves to run between the tackles, lowers his shoulder for extra yardage and is really slippery as a running back.

On his final rush of the game, Cook’s footwork in the backfield to avoid a tackle for loss was phenomenal. After avoiding the tackle, Cook turned on the boosters to get to the corner.

He’s such a smooth runner out of the backfield, but he’s equally as dangerous as a pass catcher, which Peterson simply wasn’t while with Minnesota. The Vikings seem to have the full package with Cook.

Behind Cook, veteran scat back Jerrick McKinnon returns as a third-down option and a kick returner for Minnesota.

The Vikings will try to get him involved early on the ground and through the air to provide a change of pace from Cook, much like they did against New Orleans on their first drive of the game.

Also in the fold at running back is former Oakland Raiders starter Latavius Murray. It was a forgetful debut for Murray, who fumbled on his first carry and really wasn’t much of a factor after that. He brings the thump though out of that group, and could get looks in short yardage and at the goal line on Sunday.

It’s important to note that one of the biggest factors in Cook’s big debut was the rebuilt offensive line, which features five new starters from last season’s line that couldn’t stay healthy or establish a running game.

The Vikings will line up like this left to right on Sunday:  Riley Reiff, Nick Easton, Pat Elfien (R), Joe Berger, Mike Remmers.

On paper, it might not look great, but this unit works well together. Reiff came over from the Detroit Lions in free agency and has been a calming influence up front, while Elfien has really impressed as a rookie. In fact, he became the first rookie center to start a season opener for the Vikings since 1962, when Hall of Famer Mick Tinglehoff did it.

Remmers struggled with protection against the Saints as Jordan gave him all he could, but for the most part the rebuilt unit held up well.

If they can continue to run the ball well and do just enough to protect Bradford, we could see a lot of repeat passing performances all season from the former No. 1 overall pick.

Like I said, when he’s give time he’s really good at dissecting defenses and taking advantage of mismatches all over the field.

Seeing Adam Thielen matched up with middle linebacker Manti Te’o in the slot is an obvious go-to route for Bradford.

Given time in the pocket, Bradford is able to step into the throw to an open Thielen for a big gain. Later in the game, Bradford took advantage of a similar situation with Thielen, finding him for a big gain in a matchup with slot corner PJ Williams.

Thielen is nearly unguardable out of the slot due to his speed and route-running ability. The undrafted receiver out of Minnesota State and Bradford really seem to have developed a great rapport last season, and it’s clearly carried over to this season.

Along with Thielen, third-year wideout Stefon Diggs is a real matchup issue for most defenses. Not only can Diggs be a possession receiver for the Vikings, he can also be the homerun threat from anywhere on the field.

He’s not a refined route-runner, but he just has a natural feel for getting open against defenses, and the ball just seems to find him.

Second-year pro Laquon Treadwell has all the tools of a great receiver, but he’s still trying to find his way in the Minnesota offense. With his size and strength, if he figures it out this year the Vikings will be a tough team to deal with offensively.

And that brings us to Pro Bowl tight end Kyle Rudolph, who seems to get overlooked in this offense now that Cook is in the mix, and Thielen and Diggs have broken out in a big way.

Rudolph is a new-age move tight end who can get open against defensive backs, but is strong enough to stay on the field in obvious blocking situations.

When in the red zone, Bradford will look for the big Notre Dame product, much like he did against the Saints for his third touchdown pass of the night.

Kicker Kai Forbath replaced Blair Walsh last season, but he’s honestly no better. Forbath missed an extra point against the Saints and was largely shaky on his field goal attempts, barely squeezing one through the uprights.

McKinnon is a dangerous kick returner who came close to breaking one on Monday night against the Saints before being cut down. But he’s unafraid to take a kick out from anywhere in the endzone. He clearly has a ton of confidence in himself and his abilities.

One of the most underrated areas of this Vikings team is punt returner. I’m a huge fan of Marcus Sherels, who seems to get overlooked at times when it comes to some of the best punt returners in the league.

He didn’t get much of an opportunity to show his ability against the Saints, but he has a history of busting big returns. I expect Jordan Berry to punt the ball away from the returner for the second straight week.

Overall, this is a very talented Minnesota attack with Bradford at the wheel. It would be a mistake to overlook this group coming to town on Sunday because of who is at quarterback and whom they played in Week 1.