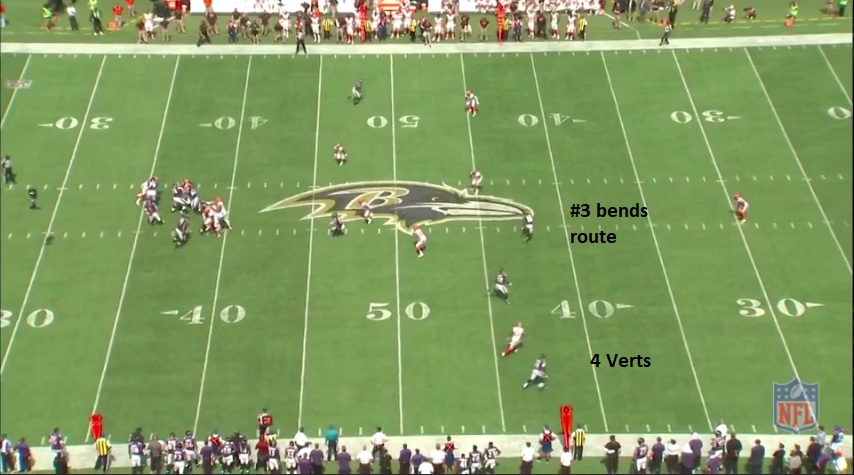 The run game has found a little better footing than Week One but it’s still ugly. Buck Allen should be the main guy, though Terrance West will see time too. Both guys are averaging under four yards per carry. Alex Collins came off the bench late in last week’s blowout loss and put up solid numbers. Maybe he gets involved more. They’re all big guys, 210+. West is listed at 225.

They’ve been able to move the ball but haven’t hit the home run ball yet either. 12 runs of 10+ yards is tied for second in the league but only one of those have gone for 20+, which you’ll see below. Chain movers. Not gamebreakers.

You’re going to get a lot of the same from Baltimore as Chicago. Plenty of outside zone, looking to run off the tight end’s hip.

The offensive line is mostly intact from Week One but missing their best player, right guard Marshal Yanda. Matt Skura should fill-in this week. The projected starters.

Hurst is a guy to attack. Steelers have dominated him before when he’s at tackle and I don’t think he’s much better at guard.

They don’t have a true fullback anymore now that Kyle Juszczyk is gone. They’ll ask their tight ends to fill-in those roles, led by Nick Boyle and Maxx Williams. Williams got a carry lined up at FB on 2nd and 1 in Week 2 against the Cleveland Browns. Something to keep an eye on.

One last thing to note. It wasn’t as consistent as the game went into the second half but in the first half the last two weeks, most of their runs went to the field side when the ball was on the hash. Rarely ran week and often used TE trades pre-snap. Steelers got caught out of position last week on some of those so something to watch for.

The Ravens’ offense has obviously been a struggle for the entire season. Joe Flacco is barely completing over 60% of his passes, his YPA is incredibly low (5.3) and he’s thrown more INTs (4) than TDs (3).

Ben Watson leads the team with 11 catches, two of which have gone for 20+ yards. Been the most reliable player with only one incompletion thrown his way. Buck Allen is second on the team with 10 catches on 13 targets. Jeremy Maclin leads the group with two TDs and owner of the only catch over 25 yards.

Speaking of which, the Ravens are tied for 30th place in passes over 20+ yards with just three. Mike Wallace has been invisible, a shockingly low 21 yards on three catches.

Baltimore is decent in the red zone, 62.5% is tied for 11th, but they struggle on third down. Converting just 36% of the time, a below average mark.

Their offense isn’t moving the ball very well and their struggling to find go-to concepts. One of their favorites is Spider Y Banana, the Jon Gruden favorite. Boot to the right (usually the field) with the first read to hit the FB/TE in the flat. Have a crosser coming from the backside, too as a secondary option.

Again, one alert to that is a fake to the boundary, where the Ravens don’t often run. Don’t bite on it. Usually going to see it on 1st down. Also get some variations of it on 3rd and short (three or less).

They still have their very Ravens-staples, their vertical shots. Here’s four verts. Can’t run Cover 3 against it or someone is going to run free downfield.

Watch out for their TE screens and Y stick (Y runs a 5 yard out) are two popular concepts.

Jeremy Maclin and Mike Wallace will start with Breshad Perriman working in for 11 personnel. Though if the Ravens can help it, meaning if they can establish the run game and control the clock, they prefer to stay in heavier packages like 12 personnel.

It’s Baltimore Ravens week for the Pittsburgh Steelers, and the Week 4 matchup in Baltimore should be rather interesting, considering the two teams are coming off of embarrassing losses.

As Alex broke down above, the Ravens really haven’t changed much in their offensive scheme, and that’s largely due to Joe Flacco continuing to be super conservative as a passer.

Through three games, I don’t think I’ve seen Flacco take more than two deeps shots a game, which is a massive change from earlier in his career where the Ravens relied on his ability to throw deep, drawing pass interference plays. I don’t think it’s a coincidence that Flacco’s game has fallen off since Torrey Smith left in free agency two years ago.

Although the Ravens’ offense has been ravaged by injuries this year, Baltimore ranks dead last in the NFL in total yards per game (263.7) despite ranking 10th in time of possession (31:10). Through the air, the Ravens are last in the league (121.7 ypg) as Flacco averages the fewest amount of yards per attempt (5.2) in the NFL.

Fortunately for the Ravens, the run game has carried the offense through three weeks, ranking fourth in the NFL averaging 142.3 yards per game on the ground.  That’s pretty surprising, considering how decimated the offensive line has been due to injury.

The loss of All-Pro guard Marshal Yanda was devastating for an offense looking to pound the rock on teams, but the unit has been glued together after the loss of Yanda, the retirement in camp of guard John Urschel and the injury to rookie guard Nico Siragusa in the preseason.

On Sunday, the Ravens should line up like this left to right:  Ronnie Stanley, James Hurst, Ryan Jensen, Matt Skura, Austin Howard.

That line would look much better if Hurst was at right tackle, Yanda was holdng down right guard and Siragusa was at left guard, but injuries are part of the game, and the Ravens have been hit hard by that bug more than any other team this season.

Running behind a banged up line, the Ravens’ trio of backs in Terrence West, Javorius “Buck” Allen and Alex Collins has had a ton of success. On the year, each running back has over 120 yards on the ground, with Allen leading the way with 152 yards on 43 carries.

West and Collins bring the physicality out of the backfield, while Allen has emerged as the dual-threat back that the Ravens have relied on heavily early in the year. As of now, he’s easily their best option on the ground and through the air.

With the banged up offensive line, the Ravens have surprisingly had a ton of success running out of the shotgun formation.

On this run late in the half against the Cleveland Browns in Week 2 in Baltimore, Allen showcased his talents on the ground, following Yanda (healthy at the time) into the second level before he’s able to the seam, getting all the way down to the Cleveland 2-yard line, setting up a Flacco touchdown pass one play later.

While Allen doesn’t have home run speed — none of the Baltimore backs do — he’s easily the most elusive. I really liked him coming out of USC, but I didn’t think it would take this long to make an impact in the NFL like he is. Better late than never, I guess.

With West and Collins, both are bruisers, but West didn’t get a ton of work last week in London against the Jacksonville Jaguars, and after a costly fumble in the second half he was stapled to the bench.

As the game got out of reach, Collins came in and showed he can be leaned on in the running game.

Running out of shotgun again, the Ravens do a nice job of using Jacksonville’s Yannick Ngakoue’s aggressiveness against him, allowing Collins to slip up the field as the lethal pass rusher comes too far up the field.

Collins has never gone down on first contact, dating back to his days at Arkansas. He’s a physical runner, but just hasn’t had a chance to really show it in the NFL, having been buried on Seattle’s depth chart before being cut.

In Baltimore, he’s getting that opportunity and taking advantage of it.

Outside of receiver, the Ravens are struggling to make plays, namely former first-round pick Breshad Perriman.

The Central Florida product continues to struggle with drops, creating separation and general football IQ, which has caused Flacco to look elsewhere. Through three games Perriman has just one catch for five yards.

Maclin was signed in the off-season to try and replace Steve Smith Jr.’s production, but it just isn’t happening. Wallace has largely fallen by the wayside in the Baltimore office, leading him to complain to the pressure about targets.

While there is some talent there, Flacco simply can’t take advantage of it due to his propensity to dump the ball off to his running backs or tight ends near the line of scrimmage.

Don’t believe me?  As a team, the Ravens average 5.5 yards per catch.

Fortunately for Flacco, he has a good trio of tight ends to work with. Veteran Benjamin Watson is all the way back from an Achilles injury and scored his first touchdown last week in London, while Maxx Williams and Nick Boyle have been splitting reps.

Williams is a guy I loved coming out of Minnesota a few years ago, but he’s struggled to stay on the field consistently for a bevy of reasons. He’s a good blocker and should be a good red zone option with his size, but Flacco hasn’t even targeted him in the red zone.

Boyle, who has struggled with performance enhancing drugs suspensions, seems to have come clean. Outside of quick outs and short option routes in the middle of the field, Flacco loves to find Boyle on quirky tight ends screens.

This is a classic TE screen, but one the Ravens run a lot, whether it’s with Boyle, Watson or Williams. Essentially, this is what the Ravens’ passing game has become.

On special teams, the Ravens are as steady as ever, led by All-Pro kicker Justin Tucker and punter Sam Koch.

Tucker is 3-for-4 on the year, missing one from 50+, while Koch averages 44.5 yards per punt on 18 attempts this season.  Want more proof that the Ravens’ offense is pedestrian?  Koch averages six punts a game.  His 18 punts on the year is fourth-most in the NFL through three games.

In the return game, Campanaro serves as the punt returner, while Collins has received the lion’s share of the attempts as the kick returner. However, Collins has yet to return a kick out of the end zone. That has to be unprecedented through three games for an NFL team to not have a single kickoff return attempt