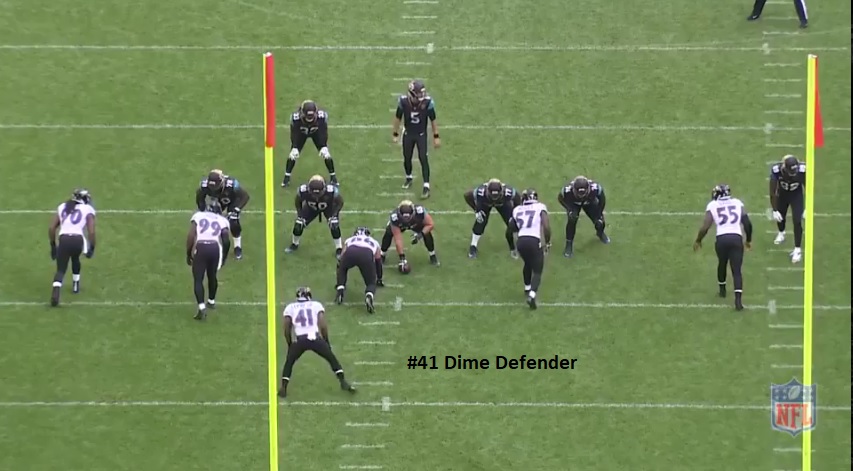 Looking at the Batlimore Ravens’ defense.

On a per-carry basis, the run defense has been surprisingly disappointing. Allowing 4.3 YPC, tied 11th worst, but they’ve allowed one rushing score all season long. Tighten up when it counts. Nine runs of 10+ yards, tied for 9th.

Got to keep an eye on Brandon Williams’ availability this week. Missed the Jags game and they took advantage. The best nose tackle in football for my money. We know one guy who will clog the middle, 6’0, 340 pounds Michael Pierce, who the team liked so much they dealt Timmy Jernigan to the Eagles. If Williams can’t go, and with Brent Urban done for the year (big loss), my guess is #94 Carl Davis will be the LDE and #69 Willie Henry the RDE. It’s a team the Steelers have been able to run on in recent years and there’s a chance to continue that streak on Sunday.

Expect Za’Darius Smith and Terrell Suggs to start at LOLB/ROLB. But they’re always deep there and have a strong rotation. Tim Williams will sub in at LOLB, Tyus Boswer will move around and Matthew Judon is a promising second year player. You don’t see a lot of teams have that kind of depth at the position. Normally get that with 4-3 ends who are bigger and need subbed out more. All these guys have played at least 30 snaps on the year.

Inside offers a tiny bit more clarity. There’s the rock of the team, C.J. Mosley, who leads the team with 26 tackles (21 solo). Has yet to miss a snap this year.

The other spot is up for grabs. Mostly see #48, Patrick Onwuasor, listed as a linebacker but could be considered a hybrid safety/LB. There’s also Kamalei Correa, a pass rusher coming out who is playing more off-ball.

This pass rush has eight sacks on the season, led by Suggs’ three. Most of that has come, predictably, from the linebackers, they have six, with Pierce having one and FS Tony Jefferson having the other. Suggs has also forced a pair of fumbles, no surprise there.

Two other notes. The Ravens have the best third down defense, allowing conversions 24% of the time, while the Steelers’ third down offense is in the bottom third. Their red zone defense is also strong, allowing a TD just 40% of the time, tied for fifth best in the NFL.

Again, there is some rotation here. At safety, it’s stable and strong. Eric Weddle and Tony Jefferson. Expect Brandon Carr (#24) and Jimmy Smith (#22) to start with Ladarius Webb (#21) in the slot. But they’re getting their first round rookie, Marlon Humphrey (#29) involved at both CB spots, taking either of their starters off the field. He saw 23 snaps a week ago.

Generally speaking, get single high on early downs and two high (Cover 2 and 2 Man). Going to see a lot of man coverage so Ben Roethlisberger will have his work cut out for him. Windows won’t be open.

They aren’t as blitz heavy as I remember them being. Two I saw came on 3rd and 11 and 3rd and 13. In this one, the dime defender and safety both come.

While a first glance at the Steelers’ schedule to begin the season may have induced optimism, they’re taking on a group of highly talented defenses the first several weeks. And, of course, week four may be the toughest one yet against the vaunted Baltimore Ravens. Let’s get to the individual breakdowns by position group.

It’s another 3-4 defense for the Steelers in back to back weeks. The defensive line is a relatively young group compared most units. Brandon Williams and Michael Pierce are the two defensive tackles that line up all along the LOS. Williams will occasionally line up in the 0-technique, but also can be directly on the guard in a 2-tech as well. Pierce is 2-tech a lot, but as I mentioned, these two can be seen in various spots throughout the game. And finally coming in as the only pure defensive end in the starting lineup is Brent Urban.

Williams has missed practice this week due to a foot injury and his availability for Sunday is in question. If he cannot play, backups Carl Davis and Willie Henry will intermittently that spot. This would be a big loss for the Ravens, as Williams is a vital asset to stopping the run, as we’re about to see.

Above you can see Pierce is lined up as a 1-tech, with Williams lined up as a 2 on the right guard. Both men are quick to attack off of the snap using their hands to hold their ground. The run is through the “B” gap, and with Williams clogging up the “A” gap, Pierce is able to throw the guard off of him and attack a wide-open lane. Shortly after, Williams hasn’t moved much at all, showing his control at the line, and is able to rip left and join Pierce on the tackle for no gain. These two can wreak havoc in these middle gaps.

Yet again it’s another great opposing group of linebackers. We’ll start with the man most Steelers fans are familiar with, OLB Terrell Suggs. Not much of an introduction needed for this guy. C.J. Mosley is the ILB, with Kamalei Correa being the Will backer and Matthew Judon the Sam.

Correa is by far a work in progress, but has the traits to make a great 3-4 linebacker. He’s very athletics, and is a playmaker who has a knack for getting after the football. But he doesn’t get as much push downfield as you’d want to see. His athleticism, though, helps him make up for that especially along the edge. Mosley is solid in coverage, he had four interceptions last year and already has one in 2017. And we all know about Suggs’ pass rushing ability.

While Suggs and Mosley are the notables in this group, Judon is an intriguing young player that may surpass these guys soon. He’s in his second year as a pro, and even though he managed zero starts in 2016, he recorded four sacks for the group in just situational play. He’s a great pass rusher that has unique awareness for his youth.

Take this play below, for instance. No it’s not a flashy sack or a big tackle for a loss, but it displays both his power and awareness in the same play. Judon fires off the snap much sooner than most of the offensive and defensive line, and gets immediate leverage on the right tackle. In the second picture, you can see how far he’s penetrated the pocket, forcing a quick pass from the quarterback. Not only that, but Judon nearly tips the pass, though it was an incomplete pass regardless. This is something Judon does often. He had two pass breakups in limited time last season, and has one already this year. His length can cause a problem in that area, especially if he’s able to attempt a deflection deep into the pocket. He also has a fumble recovery in two starts this year. 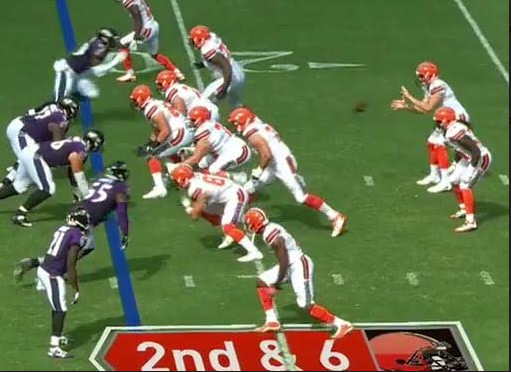 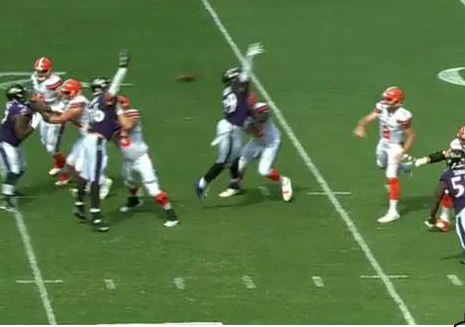 This group certainly starts with seven-year pro Jimmy Smith as the RCB, Brandon Carr lines up as the LCB on the opposite perimeter. Veteran Eric Weddle is the weak safety, while Tony Jefferson is the strong safety. They mix and match their corners quite a bit. It looks like they’ll use a combination of Anthony Levine Sr., Ladarious Webb, and Marlon Humphrey in the nickel slot situationally. Humphrey will sometimes play the perimeter moving Carr to the nickel in some cases as well.

It’s hard to key in on any particular DB, given they move around a lot, but the sure lock to get the majority of coverage on AB is Smith. He’s proven to be one of the best man-to-man corners in the league. When Jimmy Smith is playing the Steelers (8 games), he’s allowed just one touchdown to Antonio Brown which came in November of last season, and it was Webb on the coverage. Smith is a tough matchup for any receiver.

We know the Ravens are dominant against the run almost every year, and they like to man up their corners along the perimeter, hoping the pressure will get there. But these corners are very physical, and that can create some issues for them especially on the deep ball. Humphrey and Webb, two of the more physical corners (Webb is technically a safety) have already been flagged for pass interference this year. In total, the Ravens corners have combined for five penalties in 2017, tied for fifth worst in the NFL this season. The Steelers looked to exploit that versus the Minnesota Vikings and were rewarded for taking the deep shots; this may provide a similar opportunity on Sunday.