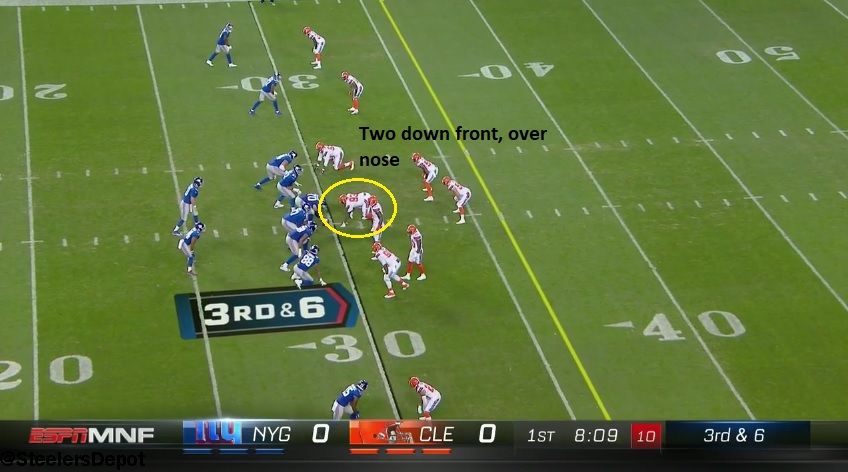 As we have been for several years now, we’ll break down the Pittsburgh Steelers’ opponent each week, telling you what to expect from a scheme and individual standpoint. Starting next week, Dan Vasko and I will break down the opponents’ defense. Flying solo for the opener.

Up first, the Cleveland Browns’ defense.

Cleveland, under new DC Gregg Williams, is back to running a 4-3. Big guy to watch – literally and figuratively – is nose tackle Danny Shelton. Missed the entire preseason and is questionable as of this writing. He had a great year in 2016 and one of the league’s most underrated players. Big loss if he can’t go. Maurkice Pouncey has always had some trouble with him.

If he can’t go, expect #93 Trevon Coley and #98 Jamie Meder to get the start inside. Always been a fan of Meder, even have some of his Ashland tape laying around the house. Classic no-neck run-stuffer who has been able to stick. Emmanuel Ogbah is coming off a 5.5 sack season and will start at LDE. Myles Garrett, who looked really good in the preseason, will miss with an ankle sprain. I think Nate Orchard, who missed all of last year, will start in his place. Carl Nassib will also get some play too while rookie Larry Ogunjobi (#65) looked like a quality run stuffer when I watched him down at the Senior Bowl.

At linebacker, you’ll get a good trio. Jamie Collins, Joe Schobert, and Christian Kirksey. Schobert is the MIKE, replacing the injured Tank Carder. I’ve seen Collins and Kirksey play MIKE/SAM so it’s hard to get a great read who is going to be where. Both have the skillset to play either spot.

The depth on this team isn’t strong but the starters are no longer no one to sneeze at. Talent across the board, especially if they can get Shelton back this Sunday.

Joe Haden is now in Pittsburgh, pushing Jason McCourty to start opposite Jamar Taylor. Briean Body-Calhoun should get the work in the slot in nickel. Jabrill Peppers (#22) has done well at safety with Derrick Kindred (#30) opposite. Both are hard hitters but Peppers especially packs a wallop and on paper, both are plus athletes.

The most interesting part of this defense is Williams. Yes, he has a, let’s say, checkered past, but he’s still one of the most aggressive coordinators in the league. His defenses and schemes look similar to the Steelers of past and present. He runs a 4-3 and uses more man pressure but loves to dial things up on third down.

Here’s their Fire X, the ILBs twisting, but unlike LeBeau/Butler, it’s a six man pressure where the edge rushers come too, instead of dropping.

While man is more popular, here is a zone pressure with a defensive tackle dropping into coverage.

Look at this third down grouping. Two down front, DL over nose and another end shifted weakside. Pittsburgh does the same thing.

On third down, Williams is pressure heavy. Goes without saying and true no matter what team you face but staying out of 3rd and long is key. That’s when this defense is at its most effective.

Most of their pressures are man. Cover 1 (man-free) putting a lot of pressure on the corners. Something the Steelers can take advantage of. Their other popular coverage is Cover 2, sometimes indicated by how deep the MIKE sets. 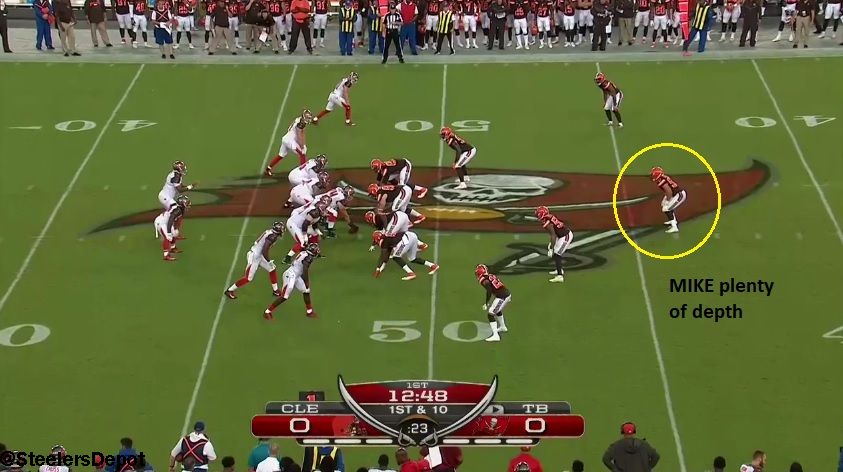