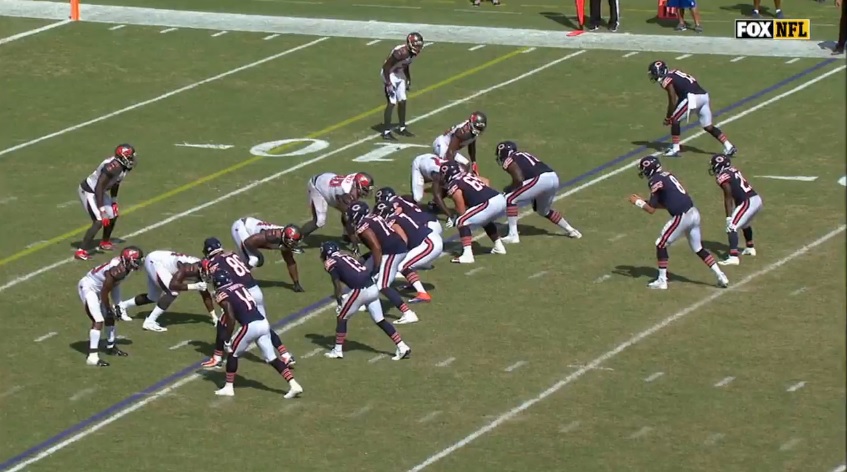 The Bears have three runs of 10+ yards, tied for 20th in the NFL. Jordan Howard had a sensational campaign last season but has struggled in his first two games this year, limited to 2.7 YPC. He’s also been hampered by a shoulder injury. That’ll thrust rookie Tarik Cohen into an even bigger role. He’s got only 12 carries but averaging more than six yards per carry, buoyed by a 46 yard run you’ll see below.

Assuming Howard plays, you’re probably going to see Pony backfields with both of them on the field, though Cohen is used as much as a receiver than a running back.

Chicago does have a fullback, Michael Burton. One carry on the season, a 3rd and 1 dive. But most of their stuff is one back. More outside zone than you’re going to see from most teams, which plays to Cohen’s speed/quickness. Goal is to get to the outside hip of the tight end.

Also get a lot of toss runs, using the speed their backs have and asking their backs to crack the EMOL while the tackles pull to the secondary. One alert is TE motion into the backfield.

Didn’t see much in the way of power. Steelers have to defend sideline-to-sideline to shut this attack down.

It’s an uninspiring group, to say the least. They’re also beat up and there’s a decent chance Sitton won’t play.

Led by Mike Glennon. It’s a dink-and-dunk offense. Glennon is completing over 67% of his passes, 10th in the NFL, but he’s averaging 6 yards per attempt, tied for 26th. So that explains the former.

Cohen leads this passing game too and is by far their best weapon. Team lead in targets with 16, that’s as many as Antonio Brown, and is only a yard shy of the team lead.

Like I said, not a vertical attack and they have just two completions of 20+ yards – one by a receiver. Markus Wheaton’s presumed return could give this unit a boost, however.

They’ll move Cohen all around the formation. When split out as a wide receiver but his split reduced, alert for a five yard out route. He’s a strong route runner and honestly, worthy of a CB looking at him, though that doesn’t always happen.

The Bears will run some common short throws. Hank, Dragon (slant/flat), but they do at least look to attack vertically. Often get #2 running down the seam in 3×1 looks. Or a “pin” concept, one of their favorites, a dig/post combo to try and get the safety to bite underneath to throw over the top. Here’s a look.

You see one receiver run a dig to the 15 and the other run down the middle of the field.

Or a levels concept, multiple crossers working different levels (hence the name) of the field. Going to see these two on 3rd and long.

If I’m the Steelers, I’m not playing much Cover 2. Can’t open the middle of the field like that and I don’t want these dig routes to work underneath the dropping MIKE backer. More Cover 1/Cover 3. Get Mike Mitchell in centerfield. He’s key to the defense’s success Sunday.

Week 3 for the 2-0 Pittsburgh Steelers brings a road trip to the Windy City for a matchup with the 0-2 Chicago Bears at Soldier Field, where the Steelers are sadly 1-12 since 1934.

Fortunately, this Sunday’s 1 p.m. matchup should be one of the easier games on paper for the Steelers, as the black and gold get a shot at a banged up Chicago roster quarterbacked by Mike Glennon.

If you put the tape of Glennon side-by-side with Baltimore’s Joe Flacco, I’m not sure you’re going to find much difference, other than one having a Super Bowl ring and being one of the highest paid QB’s in the NFL for one playoff run.

With Glennon, the Bears throw the ball to a lot of short and intermediate routes, rarely pushing the ball down the field.

Some of that can be put on the offensive line, which has a hole at right tackle in Bobby Massie, while also overpaying Charles Leno Jr. at left tackle. Former Pro Bowl right guard Josh Sitton is banged up this week and is questionable for Sunday’s game, while All-Pro left guard Kyle Long should return this week from an ankle injury, so that should give the Bears’ offensive line a slight boost.

But overall the starting five of Leno Jr., Long, Cody Whitehair, Sitton and Massie just isn’t good. If Sitton can’t go, this is how the Bears will likely line up left to right:  Leno, Long, Hroniss Grasu, Whitehair, Massie.

Not exactly a terrific starting lineup.

Which brings me back to Glennon. When the former Bucs backup was given $45 million in free agency back in March, it was absolutely laughable. Through two games, we’re still at that point with Glennon.

Against the Falcons in Week 1, he rarely pushed the ball down the field, allowing defenses to keep everything in front of them. Fortunately for Chicago in that game, they had a balanced rushing attack with Jordan Howard and electrifying rookie Tarik Cohen, allowing the Bears to nearly win the game over the Atlanta Falcons.

All of that changed in Week 2 on the road at Tampa Bay. The offensive line got whooped up front against the run, and Glennon was a turnover machine in the 29-7 loss.

More often than not, Glennon checks down to his running back out of the backfield, or throws short of the sticks to crossing routes from receivers or tight ends, namely Kendall Wright and Zach Miller.

But when Glennon wants to take shots down the field, he seems to have developed some rapport with Deonte Thompson and Josh Bellamy.

This system under offensive coordinator Dowell Loggins looks a lot like a Baltimore attack, outside of the handful of home run shots throughout the game.  Despite being a short passing attack, the Bears seem to have a lot of success in the middle of the field, which could be an issue for the Steelers’ defense on Saturday.

Speaking of issues for the Steelers on Sunday, put Cohen as priority No. 1. The rookie out of North Carolina A&T is one of the shiftiest backs I’ve seen in quite some time.

Glennon seems to look for him a lot on screens, swing passes and option routes out of the backfield.

The rookie single-handedly kept the Bears in the Week 1 game against the Falcons at Soldier Field with some electrifying plays.

Cohen did this a lot in college, but I wasn’t expecting this from him in the NFL due to the speed of defenders on defense. It doesn’t matter though; this guy has great vision, change of direction and acceleration. Plus, he’s a hard player to tackle due to his small, powerful frame.

The Bears will try and get him the ball any way they can, whether that’s in the Wildcat, on the ground, through the air or on punt returns. In fact, Cohen leads the Bears in receptions with 16.

Outside of the backfield and offensive line for Chicago, it’s an underrated receiving group missing some name recognition.

When Cameron Meredith went down with a knee injury in the preseason, I figured that’d be the end of the Bears’ passing attack. Add in Kevin White going down for the year for the third straight season and you’d think there’s nothing there.

But through two games I’ve been captivated by Bellamy and Thompson, and it looks as if Wright is finally in the right system, allowing him to work in the middle of the field.

Miller is also a steady presence at tight end, having come through near the sticks quite a bit this season for Glennon.

When Glennon is given time in the pocket, he can really spin it when pushing the ball down the field. It’s weird that he’s been so conservative to start the year, but maybe that’s been the offensive strategy through two weeks.

After getting down 29-0 to the Bucs on the road in Week 2, the Bears seemingly opened it up, allowing Glennon to drive the Bears down the field for a late score. On that drive, the veteran quarterback fired the ball into some tight windows, including the touchdown to Thompson on a flag route.

With Thompson out wide in the bunch formation, Glennon has to drop this throw into the bucket near the back pylon, and he doesn’t miss, placing it perfectly into Thompson’s hands for the score.

He needs to stop being so conservative early in games. He has the arm talent to open things up, and on Sunday the middle of the field against the Steelers could be a place to exploit.

On special teams, the Bears rely on kicker Connor Barth and punter Pat O’Donnell to keep them in games, at least for now. Barth has attempted just one field goal on the season, but he nailed it from 50+ yards out. O’Donnell has one of the highest averages in the league, recording 51.5 yards per punt on eight attempts.

The Miami (FL.) product has allowed the Bears to flip the field a time or two this season.

And as I mentioned earlier, Cohen gets touches on punt returns as well. Last week in Tampa Bay he had a major gaffe, trying to pick up a bouncing punt between two Bucs, resulting in a fumble at his own 9-yard line, which led to a Bucs touchdown one play later.

Thompson handles the kick return duties, but we could see veteran Benny Cunningham return from an ankle injury this week, which would give the Bears two solid kick returns for Sunday game against the Steelers.

Overall, this isn’t an explosive Chicago attack, but there are a few dangerous players that the Steelers must find on the field before each snap and identify who have responsibilities. Plus, the Steelers must be on top of their game when it comes to tackling for the second straight week, especially with Cohen.