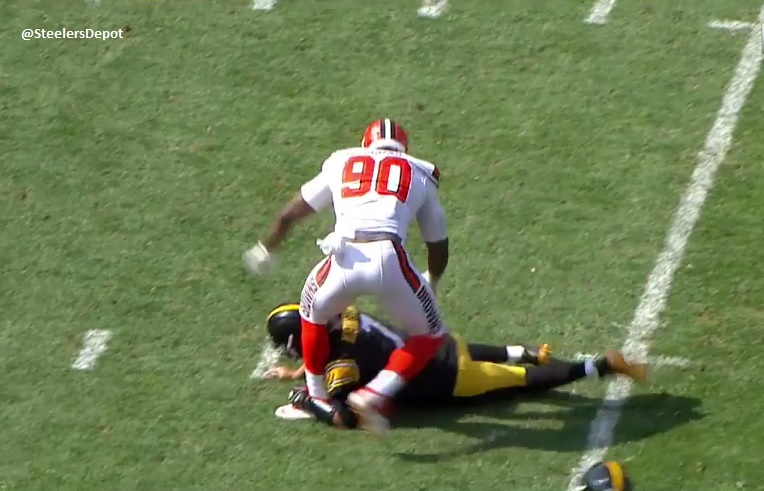 Pittsburgh Steelers quarterback Ben Roethlisberger is under quite a bit of scrutiny right now for his actions in Sunday’s game against the Cleveland Browns following his fourth quarter interception.

In case you missed it, Roethlisberger dove at the left leg of Browns defensive end Emmanuel Ogbah after initially being pushed to the ground by the player during an interception return. The Steelers quarterback then grabbed Ogbah’s ankle and ultimately brought him to the ground during the return and the two players were ultimately separated by the referee without a flag being thrown.

“I don’t know where that came from,” Ogbah said. “I just looked down and I see him trying to grab my ankle. I wondered what he was doing. All of a sudden he started like nudging it and the ref was sitting right there and he didn’t throw the flag.”

After the game was over, Roethlisberger sort of brushed off the incident with Ogbah during his press conference but on Tuesday, he went more into detail as to why he did what he did on that play during his weekly interview on 93.7 The Fan.

“I’ll tell you right now what I was thinking. The quarterbacks are afforded the right when the ball’s intercepted to be defenseless,” Roethlisberger started to explain. “I was just standing there, he pushed me to the ground, which was fine, whatever you want to do. All I was doing was holding on to him so he didn’t go try and hit any of my other guys.

“I knew he was a big guy, he would’ve tried. Because everyone else is free game, so my linemen, you can go block them and clean them up and do whatever you want. I didn’t want him to go after anybody, hurt anybody, so I was just trying to hold on.

Roethlisberger was then asked to confirm that he wasn’t losing his mind when he decided to do what he did.

“No, I was just trying to protect my guys from getting taken out,” Roethlisberger said.

That certainly is an interesting explanation from Roethlisberger and now it will be interesting to see what the NFL thinks about his actions. Will he be fined? We’ll know the answer to that question in the next few days.