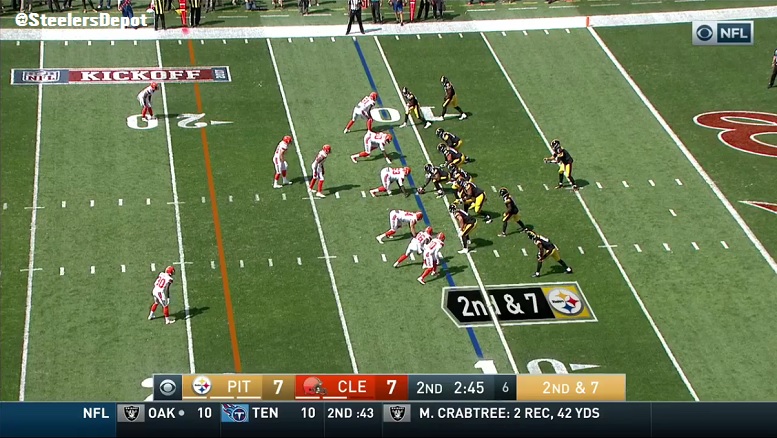 If you watched the Pittsburgh Steelers Week 1 win over the Cleveland Browns, you probably noticed that the team’s offense ran several plays with four wide receivers on the field with no player lined up in the backfield. In fact, that happened nine times in total on Sunday and according to Steelers quarterback Ben Roethlisberger on Wednesday, we are likely to see even more of that moving forward into the season.

“Well, we’ve got a lot of guys we can get on the field,” Roethlisberger said. “We want to be able to get JuJu [Smith-Schuster] on the field and that’s what that does. It creates an opportunity to get him on the field to create even more of a mismatch problem. I think you’ll see more of it because it was very good to us.”

Four-wide receiver sets and an empty backfield on Sunday certainly was very good for the Steelers offense against the Browns as those nine plays that they ran with that personnel grouping and formation produced 108 passing yards, an average of 12 yards per play. Not surprisingly, 6 of those 9 completed passes on those plays went to wide receiver Antonio Brown for 102 yards. In case you’re curious, seven of those nine plays came in the second quarter and during the Steelers fourth and fifth offensive possessions of the game. The fifth possession ended with a touchdown.

The drawback to using the 01 personnel grouping is that it means running back Le’Veon Bell is not on the field. Bell is of course a very accomplished pass catcher as he has registered 230 total receptions for 2,020 yards during his first four seasons in the league. On Wednesday, Bell was asked if he thinks him being pulled off the field Sunday in lieu of a fourth wide receiver was just a one-game thing.

Bell was later asked if he wants to be out on the field as much as he’s been during his first four seasons with the Steelers and his answer wasn’t the least surprising.

“Of course, of course,” Bell said. “I definitely want to be out there and play. But like I said, I’m just executing the game plan and doing what I’m told.”

This coming Sunday at Heinz Field, the Steelers will play the Minnesota Vikings and it will be interesting to see if the Pittsburgh offense once again uses a four-wide receiver, one-tight end personnel grouping as much as they did against the Browns. In case you are wondering, the Vikings didn’t face and such grouping in their Monday win over the New Orleans Saints.