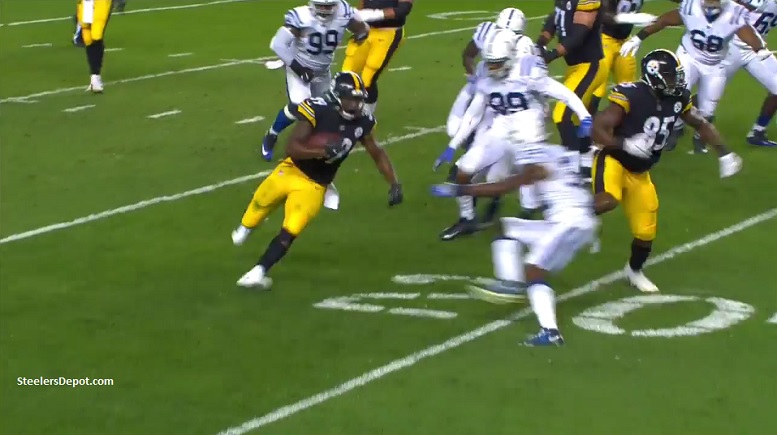 Ahead of this year’s Pittsburgh Steelers training camp getting underway, not many people would have bet that running back Terrell Watson would have ultimately made the initial 53-man roster. That, however, ultimately happened as the Azusa Pacific product and former undrafted free agent turned a strong preseason showing into a spot on this years 53-man roster.

While Steelers quarterback Ben Roethlisberger probably isn’t a big fan of preseason games overall, he admitted Tuesday during his weekly interview on 93.7 The Fan that Watson is certainly one player who benefited this year from preseason games being played.

“It gives a guy like that an opportunity, a chance, to make the team,” Roethlisberger said of Watson and preseason games. “He probably wouldn’t have made the team if there was no preseason games and he went out and he ran really hard.”

Roethlisberger went on to detail what it was that Watson did during the preseasson that likely resulted in him making this year’s 53-man roster.

“He put his head down and if he needed the yard, he got himself a yard-and-a-half,” Roethlisberger explained. “You needed five, he got you five-and-a-half, or six, at least. So, you know, he runs hard and he just did something that was intriguing. He caught the ball better than you kind of expected. He ran harder than you even thought he would.”

During the preseason, it was easy to spot all of the things Roethlisberger just highlighted when it comes to the play of Watson. Not only did the running back have a team-high 173 yards rushing during the preseason on 37 total carries, Watson also caught six passes for another 47 yards along with registering three assisted tackles on special teams.

For now, Watson has a place on the Steelers 53-man roster and it will be interesting to see if he’s able to remain there all season. The Steelers will open their 2017 regular season on Sunday against the Cleveland Browns and one can easily speculate that Watson will be allowed to dress for that game. While one would be hard-pressed to predict him receiving any carries against the Browns, it sounds like Roethlisberger is comfortable with him getting a few should the need ever arise on Sunday and beyond.

“He’s smart back there, he knows what he’s doing,” Roethlisberger said Tuesday of Watson. “He’s not a guy that you have to tell every little thing to. So, I think we’ll see some of him [this season]. I mean, I don’t know how much, but he’s a guy that we can have kind of on the shelf if we need it, or have him ready to go on Sundays if we want to kind of have a three-headed monster.”

Watson entered the league originally in 2015 with the Cincinatti Bengals as an undrafted free agent and has since been on the practice squads of the Browns, Denver Broncos and Philadelphia Eagles. Assuming he ultimately dresses Sunday for the Steelers, it won’t be his NFL debut as he played in the Eagles reguklar season finale last season and rushed nine times for 28 yards and a touchdown in addition to catching one pass for 5 yards against the Dallas Cowboys.