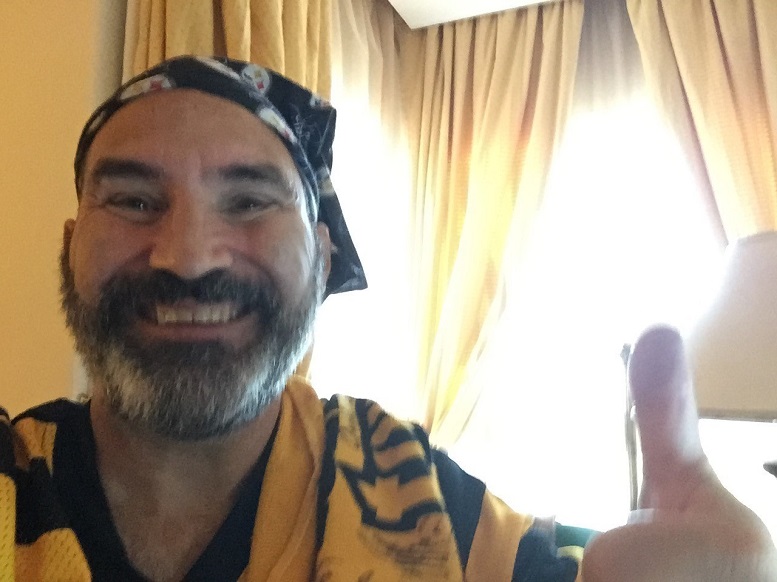 You know it’s a bad day for Steelers football when “I picked the wrong day to quit huffing glue” is rated the ‘best’ comment on the Steelers Depot First Half Live Update and Discussion Thread. It was a weird day starting with what was originally a song for an English gentleman’s club of amateur musicians. Ironically, one of the original lyrics is: “May our Club flourish happy, united, and free!” Francis Scott Key penned a poem that was set to the musical score and the rest is history – or whichever history you choose to adopt.

The Steelers chose to remain out of view for the playing of our National Anthem. In coach Mike Tomlin’s words, the team “… discussed it for an appropriate length of time. They couldn’t come to an understanding, so they chose to remove themselves from it. They were not going to be disrespectful in the anthem, so they chose not to participate, but at the same time many of them were not going to accept the words of the president. So, we decided to sit it out, to not take the field, to remove ourselves from it, to focus on playing football. And so those were our intentions.” This was a team decision that all followed except one. Most give Alejandro Villanueva credit for defying the team’s decision as he likely saw paying tribute to his fallen comrades who died protecting the rights of others trumping any protest of the flag regardless of the righteousness of their cause.

Obviously, the team was distracted as all other teams were. Instead of focusing on football; they had to debate how to handle the opening of the game. I’m trying not to take sides; every person in that stadium has the right to sit, kneel turn their backs or drink a beer while the National Anthem is being played. That said, the flag and the national anthem evoke a lot of passion.

I get that Colin Kaepernick is trying to bring to America’s attention that there are African-Americans that are wrongfully killed by the police. I also get that there are the families of police officers including those officers that are murdered in the line of duty who don’t like their loved ones being stereotyped as homicidal maniacs. Black lives matter, Blue lives matter, All lives matter. The cops that wrongfully kill anyone should be brought to justice. The people that kill cops should be brought to justice.

So now, the President has essentially asked NFL owners to force the players to stand for the anthem. He just waved a red flag at over 1,500 type A personalities. How did he expect football players to respond? The national anthem and saluting the flag is supposed to be a unifying gesture. Now individuals including our commander-in-chief are using it as a stage to push their particular social justice cause or political agenda. Yoi. “There’s battle lines being drawn. Nobody’s right if everybody’s wrong.”

As for the game itself, I have been avoiding it. It began so hopefully with the defense stuffing the Chicago Bears in the first series. Phil Brenneman II, started us off with, “Lets take control of the division today. No playing down.” Within 30 minutes, Rob captured the mood with, “what a mess of a first half.” The offense that is supposed to be a beast had put up a tame 7 points in the first half. The defense allowed the Bears to march right down the field and answer the Steelers only score. Special teams had fumbled a punt leading to the Bears first score and then got a field goal attempt blocked. The only thing that prevented a 7-21 deficit was the Bears player returning the fumble recovery slowing down to show boat which allowed Vance McDonald to punch the ball out before he crossed the goal line.

The Steelers did tie the game up but never really asserted their will on the Bears. The three straight runs to finish the game in overtime just gave the feeling that our Black & Gold heroes had had enough. As Big White observed, “James Harrison great vs run, nowhere to be found.” Mr. KnowItAll knows what he is saying: “Disgusting on all sides of the football. Out coached and out played.”

This team needs to regroup and decide where they are going to go this season.

Sorry for the rant; let’s see if Dave lets this go to print. I just want to cheer for the Steelers football, but sometimes life interferes. This Buffalo Springfield song catches my mood, For What It’s Worth