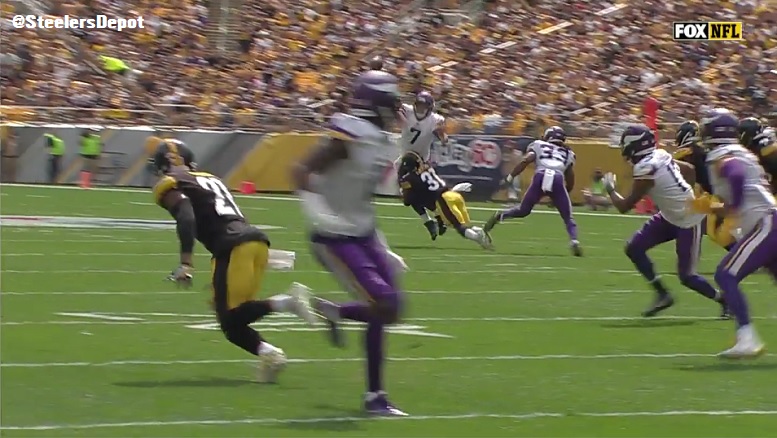 With two regular season games now in the books for the 2017 Pittsburgh Steelers, cornerback Mike Hilton has played 89 defensive snaps in total. In Sunday’s win over the Minnesota Vikings, Hilton recorded 8 total defensive tackles and another one on special teams. If that’s not enough, the former undrafted free agent out of Mississippi has also registered one quarterback hit after blitzing off the edge and another on the Vikings fake punt attempt.

“I just wanted to let him know that I’m here,” Hilton said of his hit on Vikings quarterback Case Keenum during Sunday’s game at Heinz Field. “If I can’t get a clean shot, I just wanted to make him feel my presence and I was able to do that.”

During his Tuesday press conference, Steelers head coach Mike Tomlin was asked to explain what it is that Hilton has done over the course of the last few months to establish the role that he now has in the defense.

“He’s made plays,” Tomlin said. “We dont try to over analyze it, man, we try to put guys in position to make plays and when we do and they do, we acknowledge it and that’s what we’ve done throughout this process with him in particular. We’ve given him an opportunity to make plays, he’s largely made those plays and he’s ascending in his role within our group because of it.”

Of Hilton’s 10 total defensive tackles so far through two games, three have come against the run with the seven others coming after passes were completed. Four of those tackles go in the books as stops as well. It’s worth noting, however, that Hilton has allowed 8 total receptions for 51 yards on 9 total targets while playing in the slot so far this season, according to Pro Football Focus, and thus that’s definitely an area to watch of his game moving forward into the season.