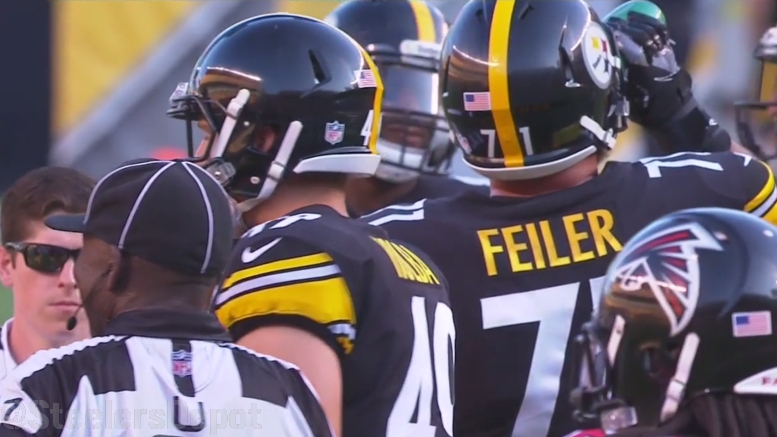 After leaving Sunday’s home game against the Minnesota Vikings with a hamstring injury, Pittsburgh Steelers starting right tackle Marcus Gilbert failed to practice on Wednesday and that resulted in him being listed on the team’s injury report. Should Gilbert ultimately not play Sunday against the Chicago Bears, Chris Hubbard would likely start in his place.

According to Chris Adamski of the Pittsburgh Tribune-Review, Feiler has been re-acclimating himself at tackle in practice this week in preparation of needing to play the position should something happen to either Hubbard or Alejandro Villanueva.

Emergency OL depth chart: Matt Feiler has been re-acclimating himself at tackle, so he's "next man up" after starters, Hubbard, Hawkins(inj)

On gamedays, Ramon Foster didnt know for sure but assumed he was the emergency OT (w/Finney to LG) if 2 OTs went down
"Likely me over Dave>" https://t.co/JU3t53nSxw

In case you weren’t paying attention during the preseason, Feiler only played at left and right guard during the Steelers four practice games. While he has past experience playing tackle, guard appears to be his best position.

Adamski goes on to report that Steelers left guard Ramon Foster said Wednesday that while he doesn’t know for sure, he assumes he would be the emergency tackle on Sunday should multiple injuries happen during Sunday’s game. If indeed that winds up being the plan, then B.J. Finney would likely take over for Foster at left guard. Foster, by the way, hasn’t played very much at tackle for the Steelers during his long career.

Lost in all of this chaos is the fact that second-year tackle Jerald Hawkins wasn’t listed on the Steelers Wednesday injury report. Hawkins, however, missed the first two weeks of the regular season with a knee injury so odds are good he’ll wind up being a healthy scratch Sunday against the Bears.