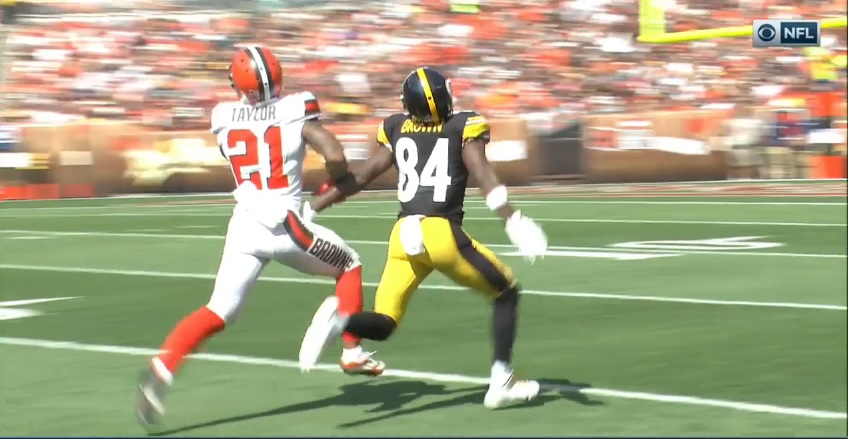 Martavis Bryant did not have a strong game on the box score in his 2017 debut, the first official game back since serving his year-long suspension. There was a drop, a screen pass where he didn’t go anywhere, and he appeared to slow up on one route downfield.

But the measure of a receiver’s presence doesn’t just come down to box score. The mere threat of him being out there, a 6’4 receiver who can fly, forces defenses to key in on him. And that opens up Antonio Brown on the opposite side of the field.

Speaking to reporters earlier today, Ben Roethlisberger pointed to one play in particular where Bryant’s presence freed Brown up.

“The pass interference they got when they grabbed AB at the last second,” Roethlisberger said via Steelers.com. “As soon as the ball was snapped, the safety took off over to Martavis. So that opened up AB one-on-one.”

Looking at the play, the Browns were playing with a single high look and bracketing Bryant on the outside. To the top of the screen in the clip below, the cornerback is playing the underneath flat with the deep safety racing over to take away anything deep. That left Brown solo on the corner, a matchup that’s always worth testing out. Cornerback Jamar Taylor hooked AB’s arm, drawing the flag, resulting in a 41 yard play.

The Steelers scored plays later, the insurance they needed when the Browns made a 4th quarter push.

That may be another reason why the offense is gravitating towards four receiver sets, something Roethlisberger has praised since Sunday. Spread opposing secondaries thin and wait to get one-on-one matchups on your best receivers. It’ll be that much harder for teams to figure out how to slow Antonio Brown. So far, few have.