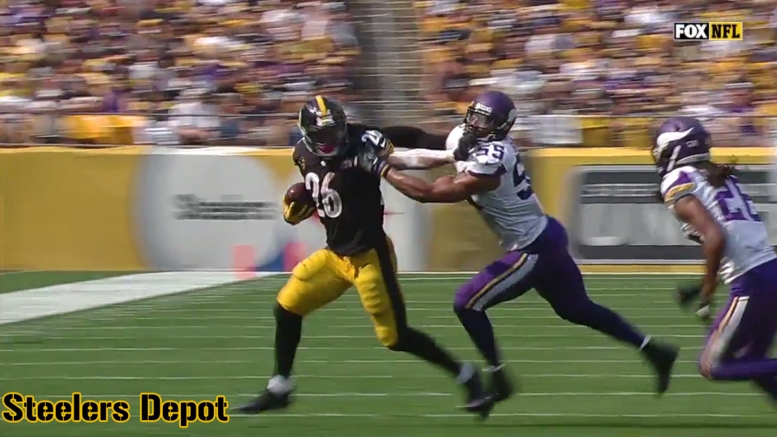 I realize that not many people are interested in franchise history and records and things of that nature right now, for multiple reasons that are not all strictly limited to the playing field, but as a Pittsburgh Steelers news and analysis website, it would be a disservice not to chronicle the information.

According team media manager Dom Rinelli, with his performance on Sunday against the Vikings, running back Le’Veon Bell became the first player in NFL history to record at least 4000 rushing yards and 2000 receiving yards over the course of the first 50 games of their career.

Say what you will about how he may have looked this season—which in truth has not been nearly as bad as may be indicated by the statistics—something I will touch on a bit later today in a film look at some of his failed runs on Sunday—that fact is impressive as a longitudinal body of work.

So, the fact that he is the first player in NFL history to record both 4000 rushing yards and 2000 receiving yards in his first 50 games is made all the more impressive by the fact that he had actually achieved that goal in his 47th game.

That game—the penultimate contest of the regular season in an emotional victory over the Ravens to secure the AFC North title—was the one that pushed him over the hump both in terms of rushing yardage and receiving yardage, adding 122 yards on the ground and 15 yards through the air.

Bell entered this season with 4045 rushing yards, and he entered that final regular season game last year for which he dressed with 3923, so that was the game in which he crossed the threshold.

Likewise, Bell already had 2005 receiving yards entering this season, so the 15 that he added in that Week 16 game last season means that he had 1990 beforehand.

Entering the season, however, he had a legitimate shot of breaking the record for the most yardage from scrimmage over the course of a player’s first 50 games, and he has come up short of that; in fact, he really has not been particularly productive at all. His total yardage over three games is something that he has bested in just one game before.

Bell ended up with 6286 yards from scrimmage over the course of the first 50 games of his career. That is more than 200 yards shy of Edgerrin James’ record of 6506. He ultimately finished fourth all-time, with Eric Dickerson’s 6294 yards from scrimmage ahead of him in third.