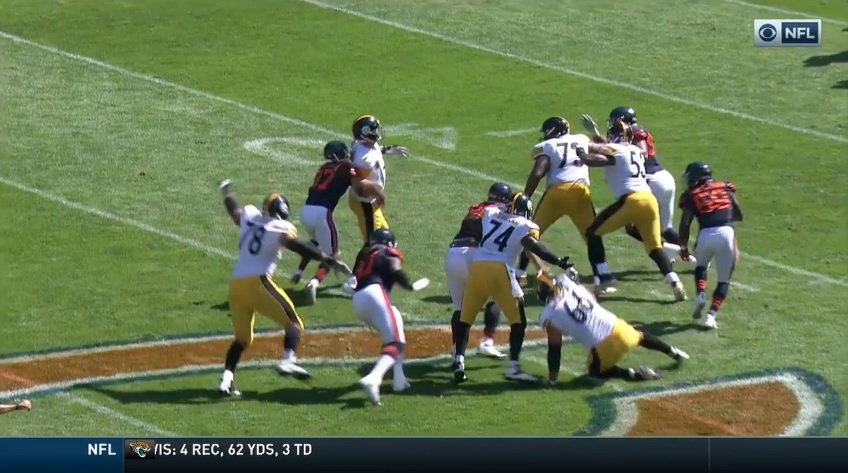 South Park is entering its 21st season, one of the longest running shows on TV. The key to their success hasn’t just been memorable characters, taking on controversial topics, or the jokes. It comes from their plot structure. Creators Trey Parker and Matt Stone once explained their key to making the show go.

The plot works in a series of “therefore” and “but.” It avoids a series of “and’s,” which connect two points for the sake of connecting them. In other words, it’s a lazy, disjointed way of writing.

Likewise, the Pittsburgh Steelers’ offense should be full of “therefore’s” and “but’s.” Antonio Brown is the biggest receiving threat therefore, Martavis Bryant should be singled up and take advantage. The receivers have gobs of talent but if you focus on them too much, the run game will open up. The Steelers have as many weapons as any team therefore, they should be one of the top offenses in the league.

But. They are not. Far from it. They’re a baby deer, slipping, falling, just trying to find their footing. This isn’t a team close to sprinting, taking off. Instead, they’re crawling and vomiting on themselves. Despite having the best weapons on paper, the offense has failed to put up 20+ points in two of the first three weeks.

AB is absolved from this. In consistent fashion, he’s been spectacular to the point where Ben Roethlisberger will force him the ball time and time again. Sometimes it works, sometimes it doesn’t. Le’Veon Bell has been bottled up, Bryant not making enough tough catches, the slot position generally ignored, all while Roethlisberger has been average.

The explanation? The solution? Tough to come up with any. You can point to the obvious stats. Terrible on third down, regressing in the red zone, a QB who has been sacked more than expected. But the specific fixes are difficult to grasp outside of a need to be more detailed.

Tweeted this out last night but worth repeating for the non-Twitter crowd (smart move, by the way). The Steelers goal is to score 30 points a game. It’s something they’ve done just once in their last nine regular season games. Over that same span, Atlanta has done it seven times, New England six, heck, even Jacksonville has done it twice.

The defense has been better, though clearly faltered Sunday, and can’t maintain being the better half of this team. That’s not a sustainable model of success. It’s a script that has to be flipped and flipped fast. Pittsburgh may need to lean on more no-huddle, quicker tempo, that’s generally seen as a change-up to give the offense a boost, but something seemingly all the players agree has been the best thing for this unit.

Something’s gotta give. Something’s gotta change. Soon. Now’s the time to bounce back, stack a couple wins, and create breathing space before the toughest part of the schedule kicks in. The offense can’t afford to be stuck in this rut for another month.