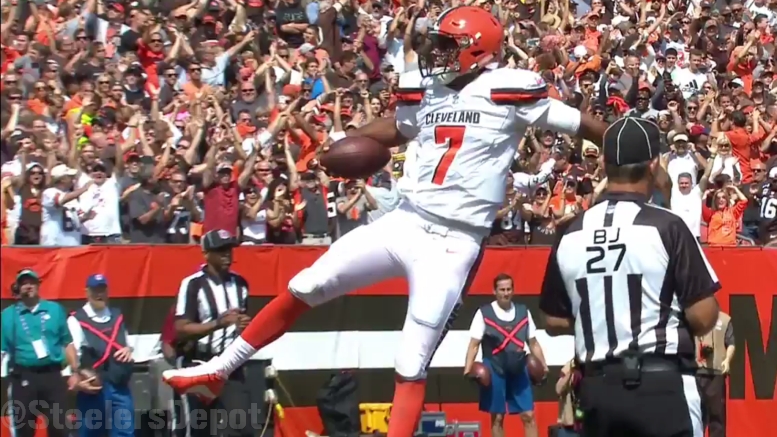 It would be fair to say that the Cleveland Browns are not particularly accustomed to winning, and that goes especially for those of the most recent vintage, as the franchise finished last season with the worst record of their history, only narrowly escaping a winless season by winning their penultimate game, finishing 1-15.

That 15th loss came at the hands of the Pittsburgh Steelers, a Steelers team that fielded an offense without Ben Roethlisberger, Le’Veon Bell, Antonio Brown, and Martavis Bryant, all of whom were back out on the field for yesterday’s game to hand them their first loss of this season.

While neither game ended in a victory for Cleveland, however, they do see the progress, and if you see the doom and gloom in the eyes of Steelers fans following the game, you might not be surprised. Pittsburgh might have won, but it didn’t come particularly easily, and can largely be attributed to Antonio Brown and a blocked punt.

Said linebacker Christian Kirksey, “We were with them the whole time. There’s no doubt in my mind that we can go out there and win that ballgame”. He went on, saying, “we have to eliminate some of the big plays on special teams like the blocked punt. If we get rid of that play, it is a super close game. No excuses for us. We just have to get better”.

That is how the game started. A blocked punt from Tyler Matakevich rolled into the end zone and was recovered by Anthony Chickillo for a defensive touchdown, Pittsburgh’s first points of the season on the opening drive. They would not score again until very late in the first half.

Rookie starting quarterback DeShone Kizer, who threw for one touchdown and ran for another, also liked what he saw in the first game of his career. “When I look at our team, we just lost to who everybody has favored in the division, 21-18”, he said after the loss. “We’re going to have some games like that. We have to find a way to score more points, and we have to find a way to stop teams better and be better on special teams, but I feel good about today”.

While Head Coach Hue Jackson rejected the notion of achieving a “moral victory” for hanging with the Steelers for most of the game and losing by three points, he did say that he was encouraged by some things that his young team exhibited that he was looking to see.

“There’s grit, there’s toughness, and there are things that we have talked about that I’ve seen and that I needed to see as a head coach from the beginning, and it’s shown itself”, he said. “Now, we just have to take it to another level”.