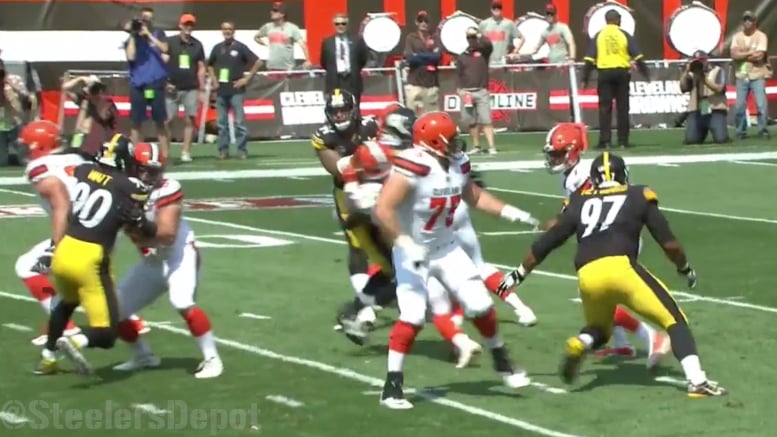 I think it’s hard for a defensive coordinator to be in too sour of a mood following a game in which his team not only won, but recorded a turnover and seven sacks. That seems to be a semi-annual tradition at this point after the Pittsburgh Steelers play the Cleveland Browns, so no wonder defensive coordinator Keith Bulter was relatively upbeat yesterday in talking with Missi Matthews for the team’s website.

Matthews asked Butler how the defense managed to record so many sacks against rookie quarterback DeShone Kizer and the Browns’ newly-invested offensive line that includes a pair of notable free agent acquisitions.

“Some of it is just four-man rush and coverage”, said Butler. “We have to get better at coverage”, he did note. “If the quarterback holds the ball long enough, if we can make him hold the ball, we can get there. That is what we have been looking for. We want to be able to rush four and still put pressure on the quarterback and make him throw us the ball every now and then”.

It is notable that four of the Steelers’ seven sacks on Sunday came with just four rushers on the field, though in one of those instances—the sack recorded by Joe Haden—they did blitz. Javon Hargrave’s sack came on just a three-man rush, while only three of the seven sacks were produced from a blitz.

“We blitzed—probably not as much as in the past, but we did blitz some in the game”, Butler said about balancing between getting home with four rushers and producing with blitzes. “A young quarterback, missed his first read, pulls the ball down, he’s looking for places to get out of there because he can be hit. Not a lot of fun”.

“That’s what happened in terms of us getting the seven sacks”, he said. Some of it was rush and coverage, some of it was just flat-out blitzing, so we can do both, and I think we’re going to be okay.”

According to our charting, the Steelers only blitzed 10 times on 43 dropbacks, and given that they were able to produce three sacks (and five total pressures), I would say that things went well in the blitzing department on Sunday.

But the Steelers also produced 10 pressures without blitzing as well, including the aforementioned four sacks. As Alex Kozora talked about yesterday, you can attribute part of this to the Steelers selectively and effectively using man coverage, which prevented the rookie quarterback from being able to hit his first read.

We will see how this plan fares on Sunday against the Vikings and a quarterback who gets the ball out about as quickly as any other in the league. Taking away Sam Bradford’s throwing options early in routes is going to be important in trying to generate pressure.