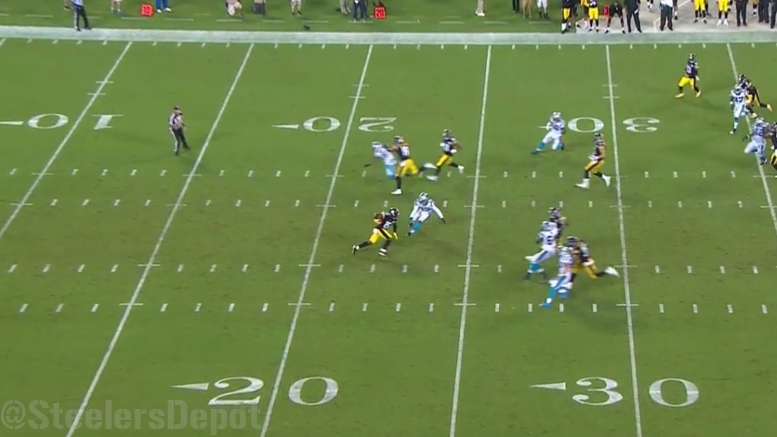 The Pittsburgh Steelers did not give their valuable rookie wide receiver, JuJu Smith-Schuster, many opportunities to showcase himself on offense, which, in hindsight, is likely wise considering that he has already been injured three times in the span of a month.

In fact, upon my initial review, it appears to me as though he only got work in the slot during the final two drives of the first half and the first drive of the second. Prior to that, it was Eli Rogers working in the slot, and after him, Marcus Tucker, moving from the outside when three receivers were on the field, Demarcus Ayers being the third.

But he did get a good amount of work on special teams. Perhaps it is simply something that I did not particularly notice or pay attention to in previous games, but it is my impression that he got a good long burn on a couple of units last night in comparison to what he saw earlier during the preseason.

In particular, he seemed to play extensively on kick coverage and on punt returns. I would guess that Danny Smith believes his size and physicality would make him a good jammer, and there is some evidence to suggest that he would.

I did notice at least one time during the game on a punt in which Smith-Schuster was working as a jammer and was able to know the gunner well out of harm’s way. In these instances, he was often used as one in a pair of vice jammers.

I think it would be fair to say that throughout recent years the team hasn’t really had all that great success when it comes to getting quality, physical play from their jammers. It is one of the most difficult tasks in football, particularly when out on an island, and it is hard to find players who can do it consistently well—despite how easily many seem to think it is to find players who can do well on special teams.

I would certainly like to see Smith-Schuster make the attempt to develop into one, at least in the early part of his career. The beautiful thing about his rookie season is that they don’t really need him to play on offense, at least not currently. Whatever he contributes in that arena can almost be regarded as a bonus.

But he is a talented player who deserves a helmet, and working on special teams will help him do that. He threw a couple of solid blocks on the punt return unit and even recorded a tackle on a kickoff, while being down the field for others.

The young man’s career is not by any means going to be defined by what he does on special teams, but it should help kick things off. He certainly has the physicality and the demeanor that could make him a positive asset in this area.