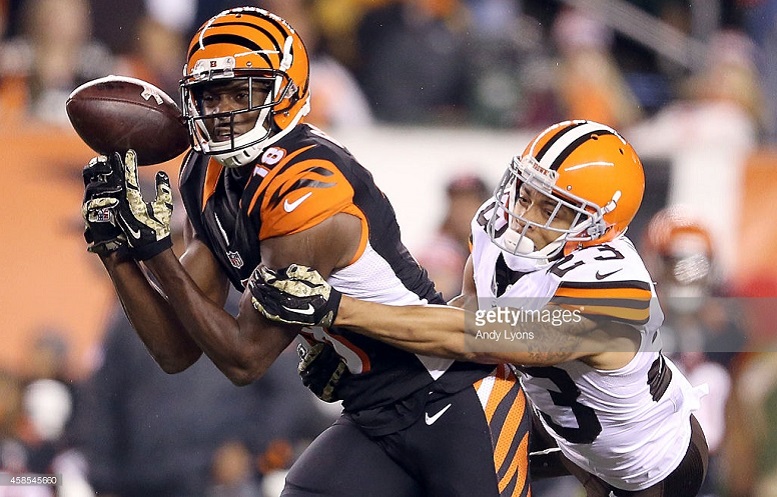 When the Cleveland Browns released cornerback Joe Haden a little over a week ago, Cincinnati Bengals wide receiver A.J. Green maybe smiled just a little bit upon hearing or reading about the transaction. That jubilation, however if there was any at all, was likely short-lived as it didn’t take long for Haden to sign with the Pittsburgh Steelers. In short, Green will likely still have to face Haden twice this upcoming season. In a recent guest post for The Players’ Tribune, it’s clear that Green probably still considers the Steelers newest cornerback one of the best in the league at his position.

On his recent list of the 5 toughest cornerbacks he’s faced so far during his NFL career, Green has Haden ranked second-overall with only Arizona Cardinals cornerback Patrick Peterson listed ahead of him. Here is what Green wrote about Haden:

Two things come to mind when I think about Joe. One, this guy has got the longest arms I’ve ever seen on a corner his size. I remember the first time I lined up across from him in college, I looked down and his fingers were almost touching his ankles. He’s dangerous because he’s only 5′ 11″, but he’s got a surprisingly long reach. Two, this guy has four brothers. You know a guy is going to be super competitive when he’s got four brothers.

When you line up against Joe, he’s going to be laying hands on you all day. He’s going to initiate contact off the line with a quick stab to try to throw off your timing, and then try to ride your back hip the whole way. Watch the stab here.

Joe knows that you only got two seconds to do your work. This is something I think the average football fan might not totally understand. Like, they see the ball snap, and then they watch the quarterback drop back, and then the ball is in the air, and it all seems like a pretty long time. But if you could see the game through a receiver’s eyes, you’d realize that he only has two seconds to do his work. You got that three-step drop — that’s your whole window. By the time the ball is in the air, you better have your separation already.

So Joe knows that if he can just disrupt your first two steps off the line, he’s got you. He’s probably the best there is at knocking you off your route just a little bit — just enough where the ball is a half second early or a half second late. This is the kind of stuff that doesn’t always make the highlights, but that you appreciate as a player.

That’s quite the compliment from Green and he certainly should know all about Haden being as he’s played in seven games against him so far during his career. The last two seasons Green and Haden have failed to lineup against each other when the Bengals and Browns have played due to them respectively missing games with injuries. From 2011 to 2014, however, Green and Haden played in seven total games against each other and the Bengals wide receiver managed to catch 28 passes for 416 yards and three touchdowns on 60 total targets in those contest. Now, without looking at each game and every Green target, it’s hard to know how many of those catches that he had came with Haden in coverage. With that said, I found all three of Green’s touchdowns and I have them linked below for you.

It’s pretty obvious that the first touchdown, way back in 2011, was a result of the Browns defense not being ready as nobody is covering Green on the outside. The second one, a 4-yard score in 2012, also can’t be blamed on Haden. In the third and final one, however, Green beats Haden deep down the left side for a 57-yard score.

In the last four games that Green and Haden have faced each other in 2013 and 2014, the former registered 17 receptions for 130 yards and no touchdowns on 41 total targets. That equates to a 41.5 percent catch rate and just 7.65 yards per catch. Will Haden be able to help hold Green down in 2017? We’ll find out starting in Week 7 as that’s when the Bengals are scheduled to play their first of two games this season against the Steelers.