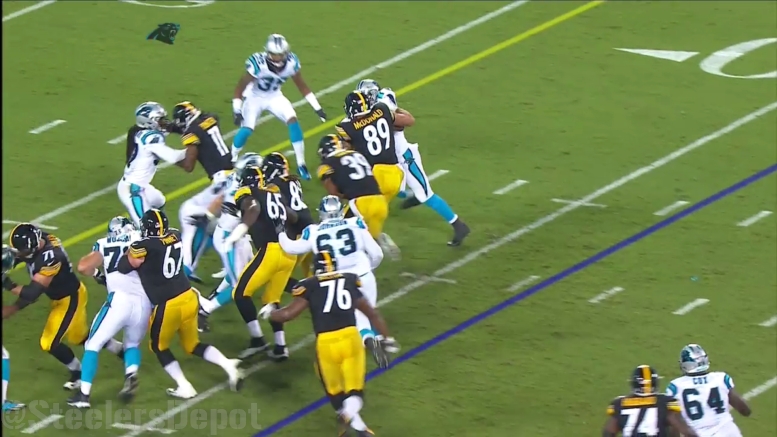 With the 53-man roster now having been completed, I thought that I would give my thoughts on some of the decisions that the Pittsburgh Steelers elected to make. After all, I have made several predictions about how it would ultimately work out, and each of them ended up coming pretty far off—though I did predict seven cornerbacks.

For starters, I was pleased to see that the team did not defer to veteran experience when it came to the third running back spot, electing to keep first-year Terrell Watson over Knile Davis and Fitzgerald Toussaint. Neither of them have a particularly sterling track record running the ball, and have not of late offered much as returners, so they had limited value.

I was a bit surprised that the Steelers seemingly chose to keep Justin Hunter over Sammie Coates considering that Hunter does not play special teams, but it led me to two further thoughts. It’s likely that their decision was at least partially influenced by the fact that Coates offered some trade value, as happened in the punting battle two years ago. Additionally, I would like to think that this indicates they actually have a plan for Hunter, perhaps a red zone package, that would allow him to contribute.

At tight end, I was disappointed to see David Johnson released, and hold out hope to see him back. While there is reason to anticipate improvement from Xavier Grimble, his maddeningly inconsistency has remained ever-present. But perhaps they felt more comfortable with that after acquiring Vance McDonald.

I did not think it was necessary to keep Matt Feiler, and I wonder if they would have made the same decision had he retained eligibility for the practice squad. While I am happy for him, I feel the roster spot would have been better spent elsewhere, rather than on a lineman who may well never dress for a game.

I am inclined to think that Daniel McCullers is a placeholder at third-team nose tackle, although he could still stick if they find nothing to their liking. It would be surprising if he ever dresses this season barring injury, unless they so value his work on the field goal blocking unit. He could also be used on the goal line, but in the preseason, Tyson Alualu played ahead of him.

I don’t think there was any other decision to be made at inside linebacker. They kept the four they should have and no more. I wouldn’t mind seeing L.J. Fort moved up to top reserve. Arthur Moats’ roster spot due to his salary could have been tenuous, but evidently they don’t mind. If he is moved, it will happen before week one, because his salary would become guaranteed at that point.

I do like the d-day decisions that they made at cornerback. Being able to get something back for Ross Cockrell after the Joe Haden signing was a definite win, and I was obviously in favor of keeping Brian Allen, who can contribute on special teams. It seems likely that Cameron Sutton could be moved to short-term injured reserve later today.

I was also pleased to see that they did not keep any additional safeties, because it indicates that the health news regarding Mike Mitchell and Jordan Dangerfield is favorable. Still, this would be another major target on the waiver wire, and they did express interest in T.J. Ward.

Whenever a draft pick doesn’t make the roster, it’s disappointing, but it’s even more disappointing when it’s a long snapper, a position that is not frequently drafted. Still, I respect the Steelers’ due diligence, likely knowing that Greg Warren was done. They added a draft pick and provided him competition with a guy who has played a few games in the league.