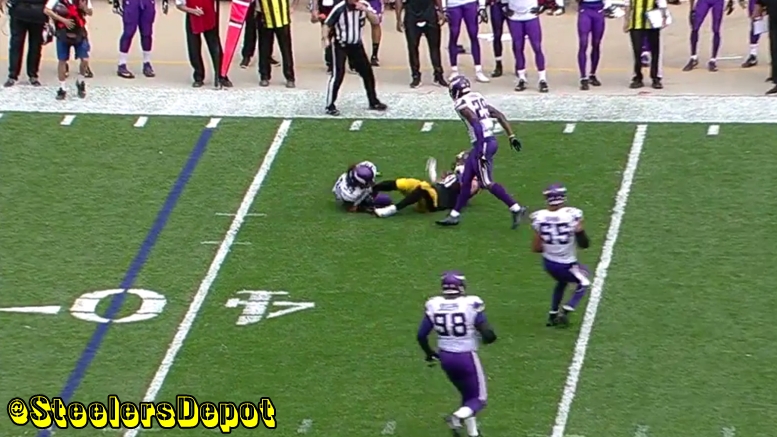 So the Pittsburgh Steelers have a bit of an issue at tight end—perhaps more than one issue. We already knew going in that the team wasn’t all that happy with the quality of play from the position, which prompted them making a trade for Vance McDonald from the 49ers, who didn’t have the most encouraging debut.

Now we have injuries to worry about.

McDonald was already forced to miss Sunday’s game with a back injury, and he is already known to be a player with an injury history. Hopefully this will not be a prolonged issue, but we should get an update from Head Coach Mike Tomlin about his status later today.

Meanwhile, the Steelers’ starter at the position, Jesse James, suffered an ankle injury on the first play of the game. He had to come out, but he eventually worked his way back in and played the majority of the game, probably banging it up a couple more times, including one notable reception in the second half in which he was tackled somewhat awkwardly in the flat.

James apparently told Jeremy Fowler of ESPN that he plans to play against the Bears on Sunday, but admits that the ankle injury is an issue that he is dealing with, so even with him out on the field, they are not going to be getting 100 percent of him.

With James ailing and McDonald’s status uncertain, Xavier Grimble suddenly becomes a crucial figure. The second-year tight end played only one snap during the season opener, somewhat randomly, but he saw more than a dozen on Sunday, and that is not including the victory formation snaps at the end of the game.

While he did not record any statistics, he did have a five-yard reception on the third play of the game that ended up being negated by an illegal formation penalty, and for the most part he generally served as a blocker, but if he is needed to play a larger role, the Steelers seem willing to give him the opportunity.

As we already saw on Sunday, the issues at tight end are also re-opening the vault to the tackle-eligible, meaning that we are likely due for more facetime for Chris Hubbard, who saw a decent amount of work there before being called into action at both left and right tackle during the game due to heat-related issues with their starters.

While the tackle-eligible was a reasonably frequent feature of their offense in the second half of last season, they did not use it at all during the preseason, nor in the season opener, but clearly it was never off the table.