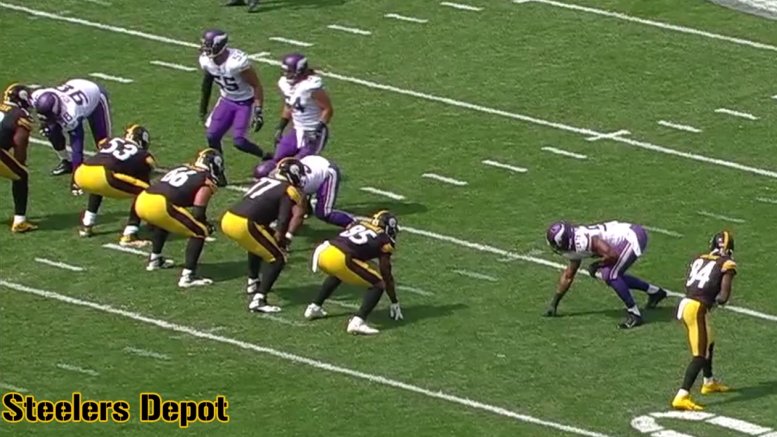 Considering how shorthanded the Pittsburgh Steelers were at tight end on Sunday, it is not surprising that Xavier Grimble, the second-year man, saw a good many more snaps than just the one that he had during the season opener.

And in his dozen and a half or so snaps of play, he found mixed results, though not entirely his fault. As you will recall, the Steelers’ newly-acquired tight end, Vance McDonald, sat out the second game of the season with a back injury.

Jesse James, their starter, proceeded to suffer an ankle injury on the first play of the game as he got rolled up on from behind. That forced Grimble into early action on the second play of the game, though the tackle-eligible was already in play, with Chris Hubbard on the field for the first snap.

And joining him on the second was Grimble. Hubbard on the line to the right side, the tight set off the line next to him. On this play, the pair of them did a very nice job of not only sealing off the left defensive end, but also sticking on him, pushing him upfield and eventually getting him on the ground.

Hubbard checked out on the next snap, on third and three, but Grimble stayed in. He ended up seeing the target, simply working upfield and sitting in a zone. As the middle linebacker crossed his line of sight, quarterback Ben Roethlisberger let the ball go and the tight end caught it for five yards.

Unfortunately, the reception was negated by an illegal formation penalty, and they failed to convert the subsequent third-down play.

The Steelers opened the next drive with a two-tight-end look, Grimble doing a nice job on backside contain on a run the opposite direction. On second down, the Steelers actually had him show a fullback look before settling off the left side before the snap. Here, they asked him to work to the second level on the inside linebacker. He couldn’t fully reach him, however, in part because the end navigated him inside at first, which we will see again.

A couple of plays later, out of 12 personnel, Grimble the outside tight end to the right, the Steelers ran off right guard. With the strongside outside linebacker playing up against the line, he crashed down on the defender and proceeded to drive him out of the play.

Later, midway into the second quarter, he was asked to stick to the right defensive end as the left tackle worked upfield, but Grimble ended up getting shed as his assignment helped get in on the tackle after a gain of two on first and 10.

It was overall neither a particularly encouraging nor discouraging showing from the second-year player. He showed power and potential on a few blocks, and others indicated his continuing struggles with inconsistency.